Good morning! I just got back from my morning walk where I saw a group of five deer.  Then I saw one of the Mamas of that grouping start to run toward my friend and I.  There were two baby deer with them so I'm sure they were being protective but it was so scary. We started to run but I worried that would make them chase us more. I'm not sure what deer instincts are. We were finally able to round a corner by a chain link fence and hide from them.   We started running again trying to make it to the road and it was a good thing we did because they ended up also rounding the same corner where we were to get to the woods.  Aaaggghhh! My husband insisted deer do not chase people and that we were fine but I disagree. When they have two babies with them they are going to protect them.  So.... I'm going to live life today like I just barely escaped death! It's much more exhilarating to view it that way. And my husband is going to live life today like he is married to a crazy girl.

In art news... Sometimes when I procrastinate a project I am far more productive in other arenas than I would ever be without said project. I really want to make a series of paintings on paper and I'm starting to collect ideas for that but my fear of failure is out of control right now. So instead I have been making yarn pom poms like crazy.  I've been wanting to find a way to make banners and garlands that were not made of paper so they would be more substantial but it's really taken me a long time to find the right materials I want to work with. I used to hate yarn. I don't know why but I never considered it to be a material that I could ever work with. But now I'm obsessed with these pom poms.

I spent a long time trying to take this silly picture. I felt like I was chasing my tail-setting the camera up, taking it, running to check the image, setting it up again... finally I think this is as successful as it is going to be.  Those pretty house pillows in the background were made by LeiLiLaLoo. 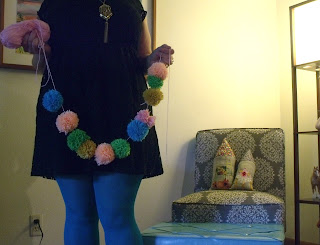 I think I'm finished with this garland. Here is an instagram sneak peak. 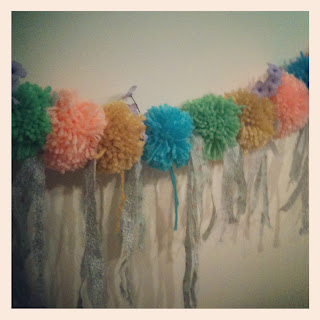 I also started on a Christmas one. I've never been one for holiday-themed crafts. I'm always so obsessed with brighter colors and Springy looks but I'm really digging Christmas colors this year. I'd like to make several variations to sell in my shop. 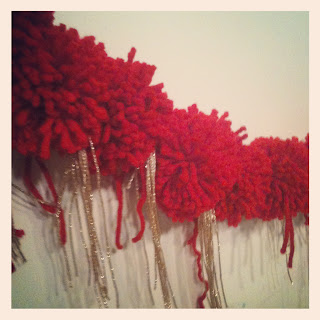 I really have been working on some drawings, too. I'm working on new imagery which has been refreshing but also a little intimidating. I feel like I haven't used new imagery in a long time so it's completely overdue but that unknown territory is slowing me down. 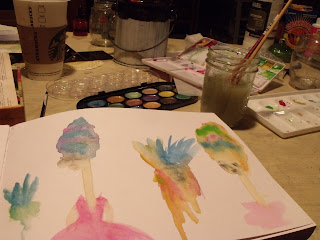 I hope I don't sound whiny. I'm excited to be using new images and new thoughts.  It's just that same 'ol fear that always creeps up on me.  That's why I keep making so many pom poms. I know what they are going to be in the end. 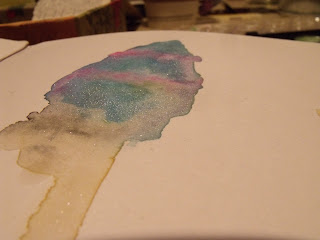 I hope you live your day today like you also narrowly avoided a deer attack!
Posted by A Beautiful Party at Monday, November 05, 2012

It's a good thing you ran, I've seen scary videos where people get trampled and attacked by deer. I've heard before where people that are running will imagine they're being chased by zombies. This could be the beginning of a new exercise program, where a deer is REALLY chasing you.

Speaking of Christmas colors... I love the energy that is created by the colors reds and greens and always find myself using them, only to realize later that to everyone else it just looks like Christmas colors. I have this pendant in my etsy shop that is like that and it has been featured in about 20 different christmas themed treasuries. I hate that and just wish someone would buy it already. I love the solid red colored poms though, for Christmas decorations. Think I might need one for our mantle :)