A Beautiful Baby (this title was inevitable, right?) 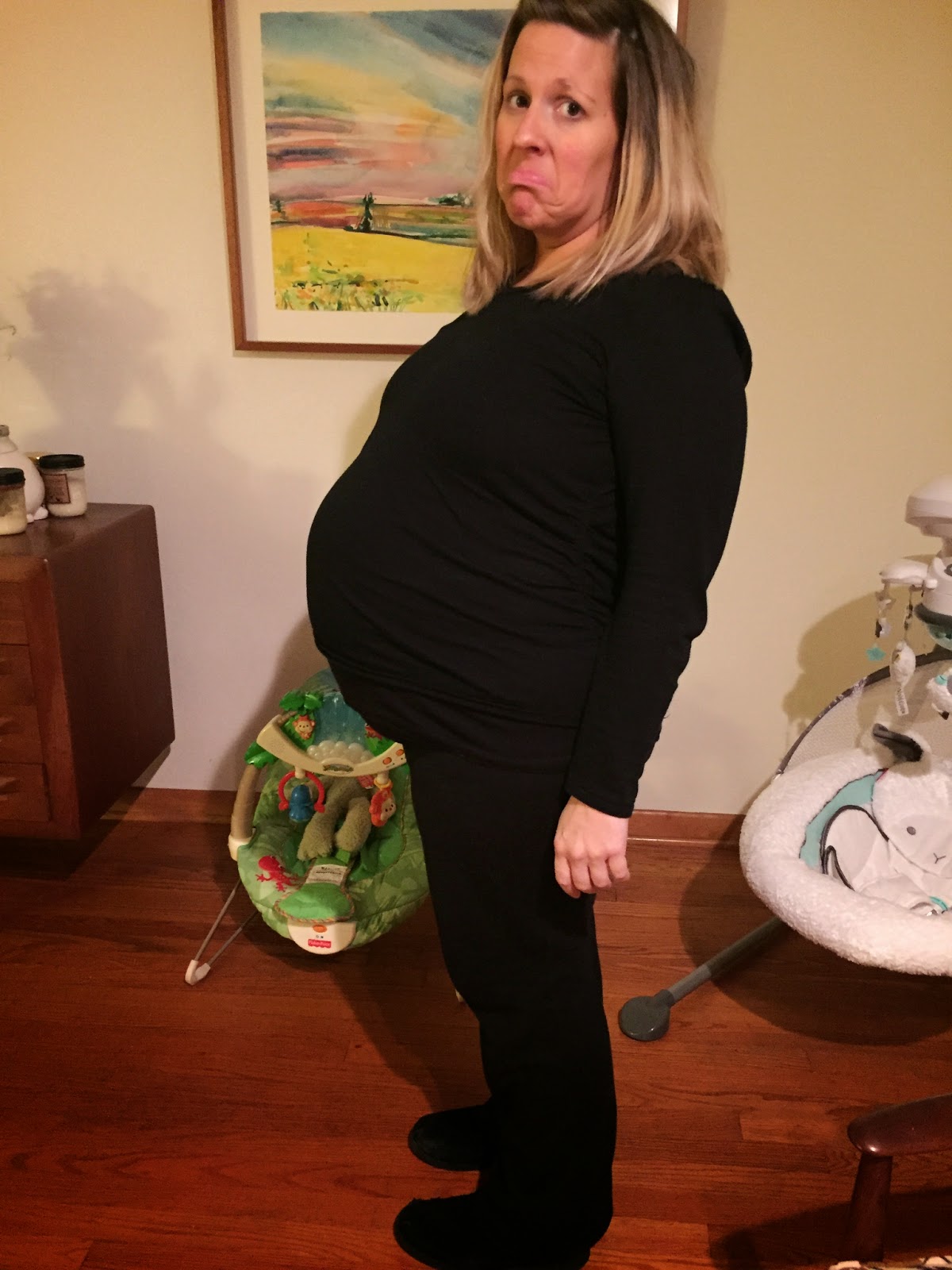 About two weeks ago I looked like this.  I was excited to see my little girl but thought she was never going to come.  I was also ready to eat sushi, deli meat and sleep on my stomach. But most importantly, little girl.

On Saturday, 12-13-14, I went into the hospital to be induced.  We naively thought we would have deliver on that same day and Maybellene would have a neat birthday.  Look at how optimistic I look. Look at that fresh hair.  Check out the fake tan and light make-up. I wanted to look nice but not like I tried too hard to look nice. I imagined pictures of me holding my baby and looking fresh like Kate Middleton.  The word of the day was Naive. 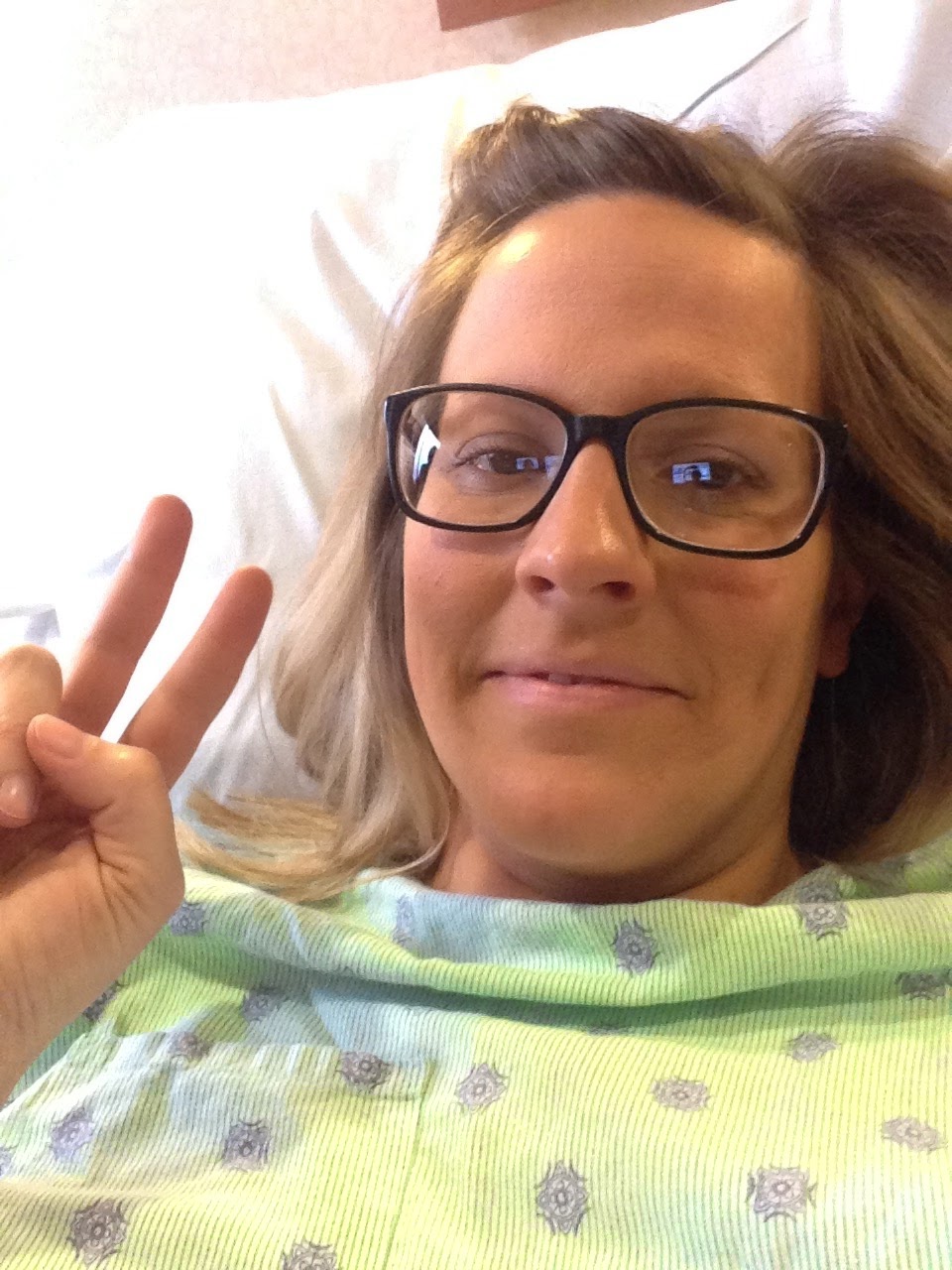 Finally Sunday evening, 12/14/14, Maybellene arrived just in time to not have to be delivered by cesarean section.  We were seriously about a half an hour away from having it done when my body changed directions quickly and said, "No! We are doing it this way!"  Something tells me this may be part of Maybellene's personality, make it a struggle and then finally give in.  I don't care how long we argue, she is not getting a tattoo before she is eighteen. 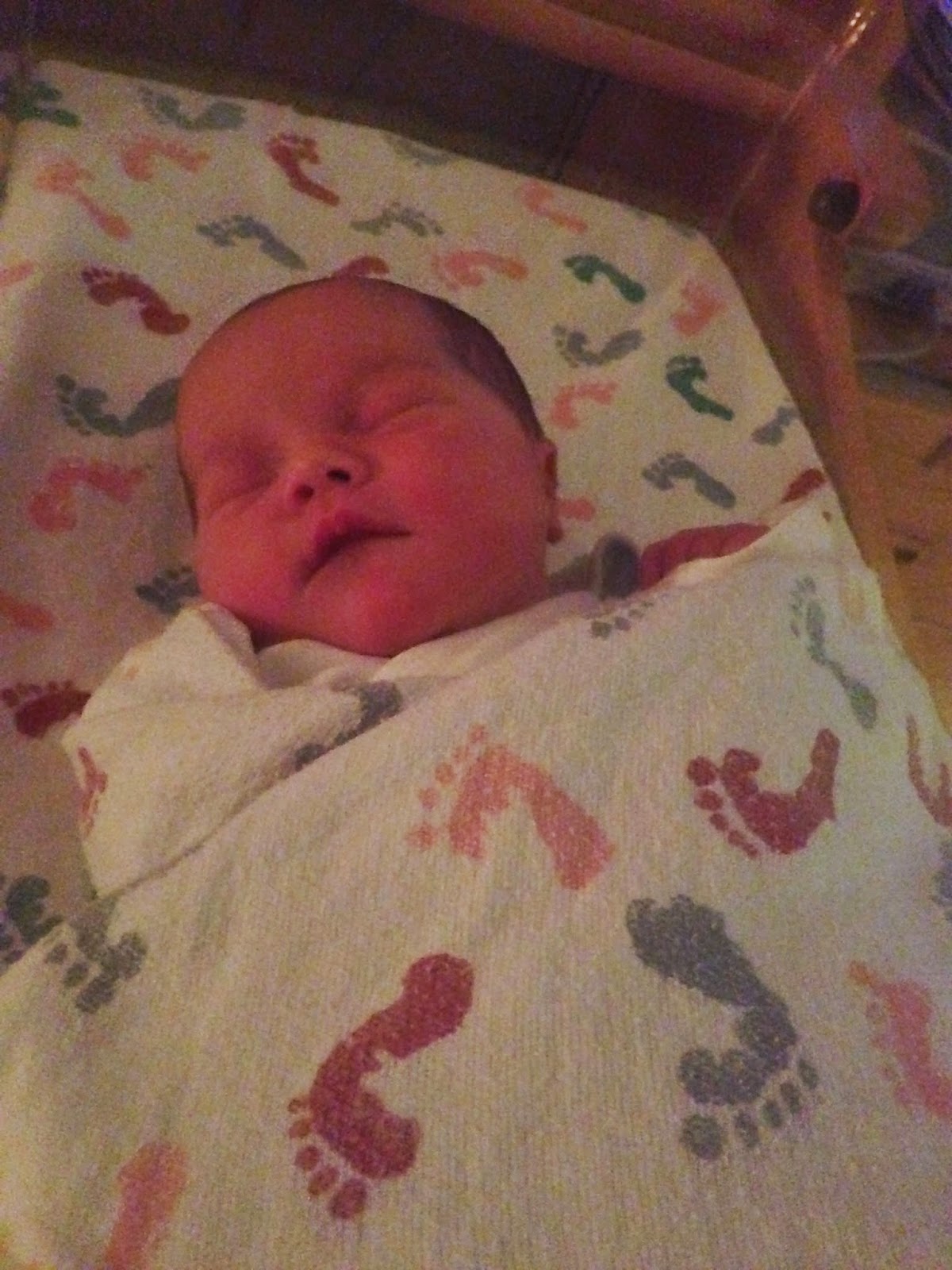 Look at her, perfect. Maybellene Rae, 19" long and 7 lbs 3 ounces.  The first night my husband and I were terrified.  We had her at 11:00 pm and by the time everything was finished it was past midnight and our family left and the nurses and doctor left and it was just the three of us.  The whole time we were in the hospital it was a total blur.  I held my baby tight and tried to figure out how to be the best parent I could be. I read books and took classes but once I had this tiny creature in front of me my brain melted and I was unsure of everything.

We came home and it was even scarier. I suddenly didn't have a button that would call a nurse to make sure the little wheeze in her breathing was nothing or that she was sleeping and eating the appropriate amount of time. I was so sleep deprived that I continued to ride through the blur and make sure I was doing the best I could.

Putting her in her moses basket was a real highlight.  I had imagined her in it for many months before and now she was finally there.  But the crazy worrier in me can't be totally relaxed while she is in it because I worry she isn't getting enough air in there or that the handle will come down and get in her face. 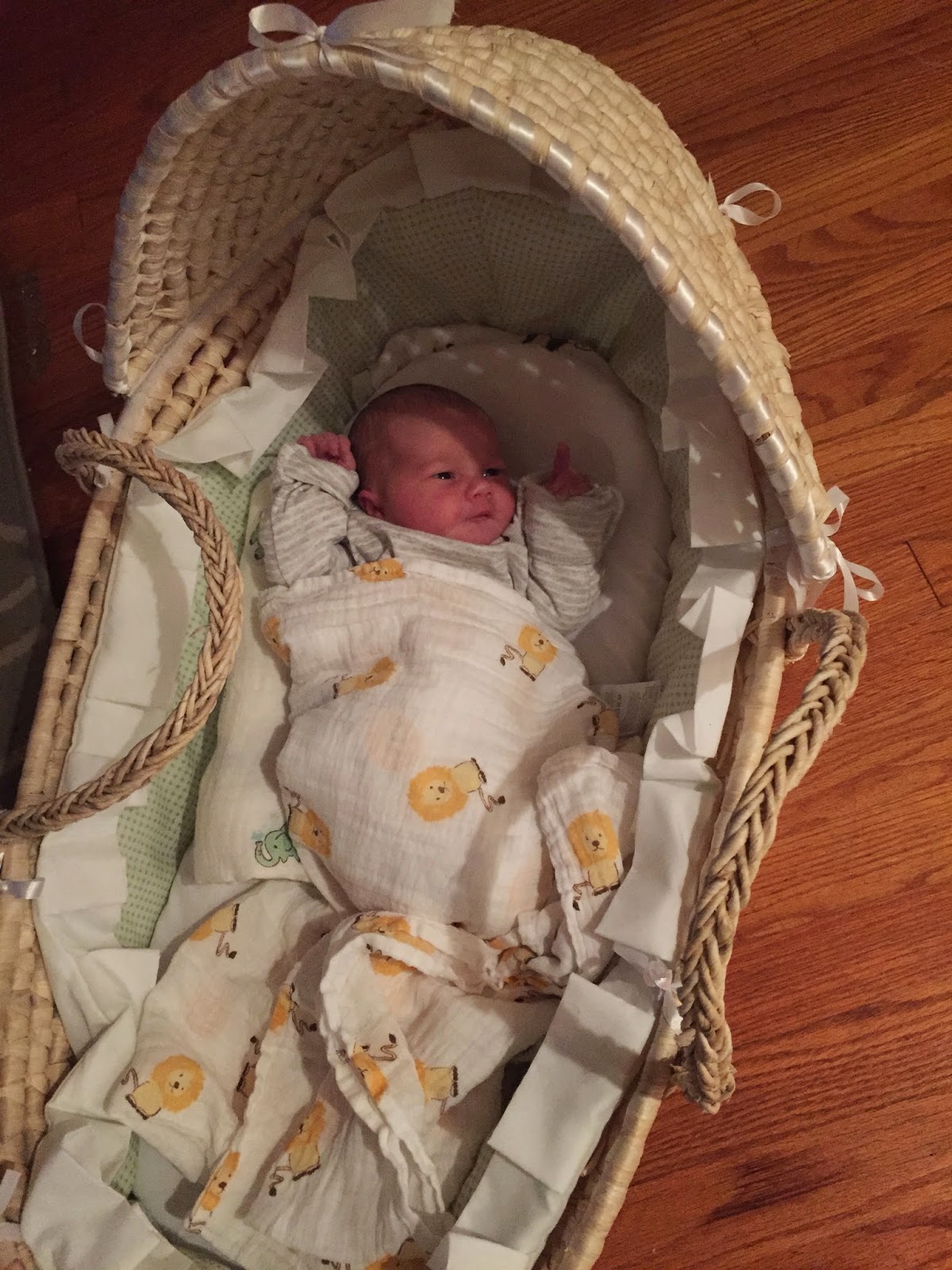 It's been almost two weeks now and I have spent way too much time worrying.  I worry that I worry too much. I get embarrassed for worrying so much.  Nights are long and we are awake more than asleep so it just gives me more time to worry.  I know this is common for most first time moms so that eases my worries a bit but it has shown me what I really need to work on as a parent. I can promise to fill her bedroom with a million balloons during the night before her birthday so she wakes up to magic. I can read her a million books a day and take her on various adventures and make her yummy healthy treats.  I can do all those things to make her life a beautiful party but until I learn to slow my worries I know I will never be truly present.  So this is the first thing I have learned since Maybellene has entered my world. 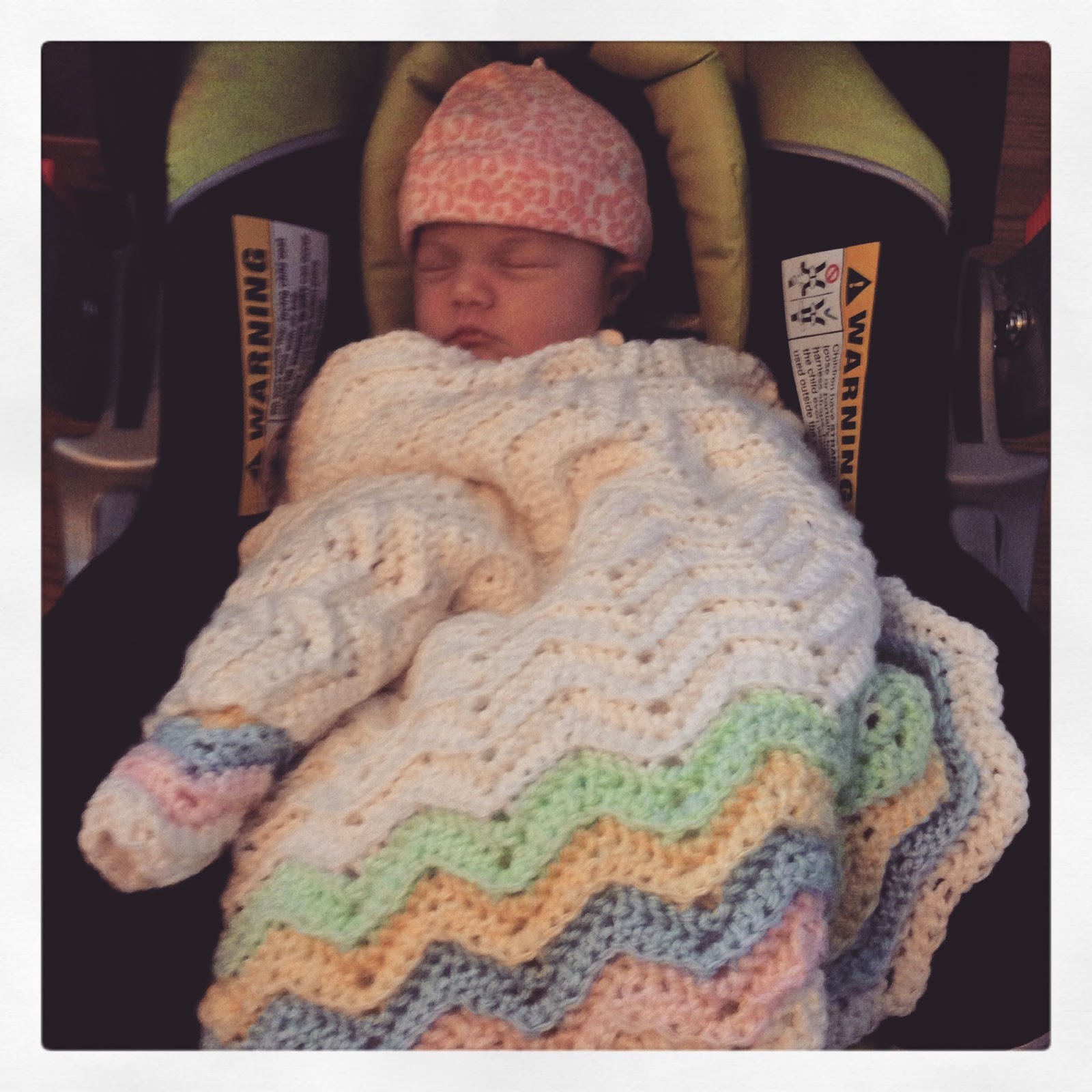 My mom helped me a lot the first week we were home and J's parents came and helped out, too.  Now week two is almost over and the three of us are figuring things and are mostly a long way from where we were that first night.  I think we are even keeping our house cleaner than we ever did before there were three of us.  By we I mostly mean J.  He has been more amazing than I could have hoped.  Because feedings are exclusively up to me he gets much more sleep during the night and does so much work during the day to keep his girls happy and comfortable. I don't know what I'm going to do when he goes back to work. 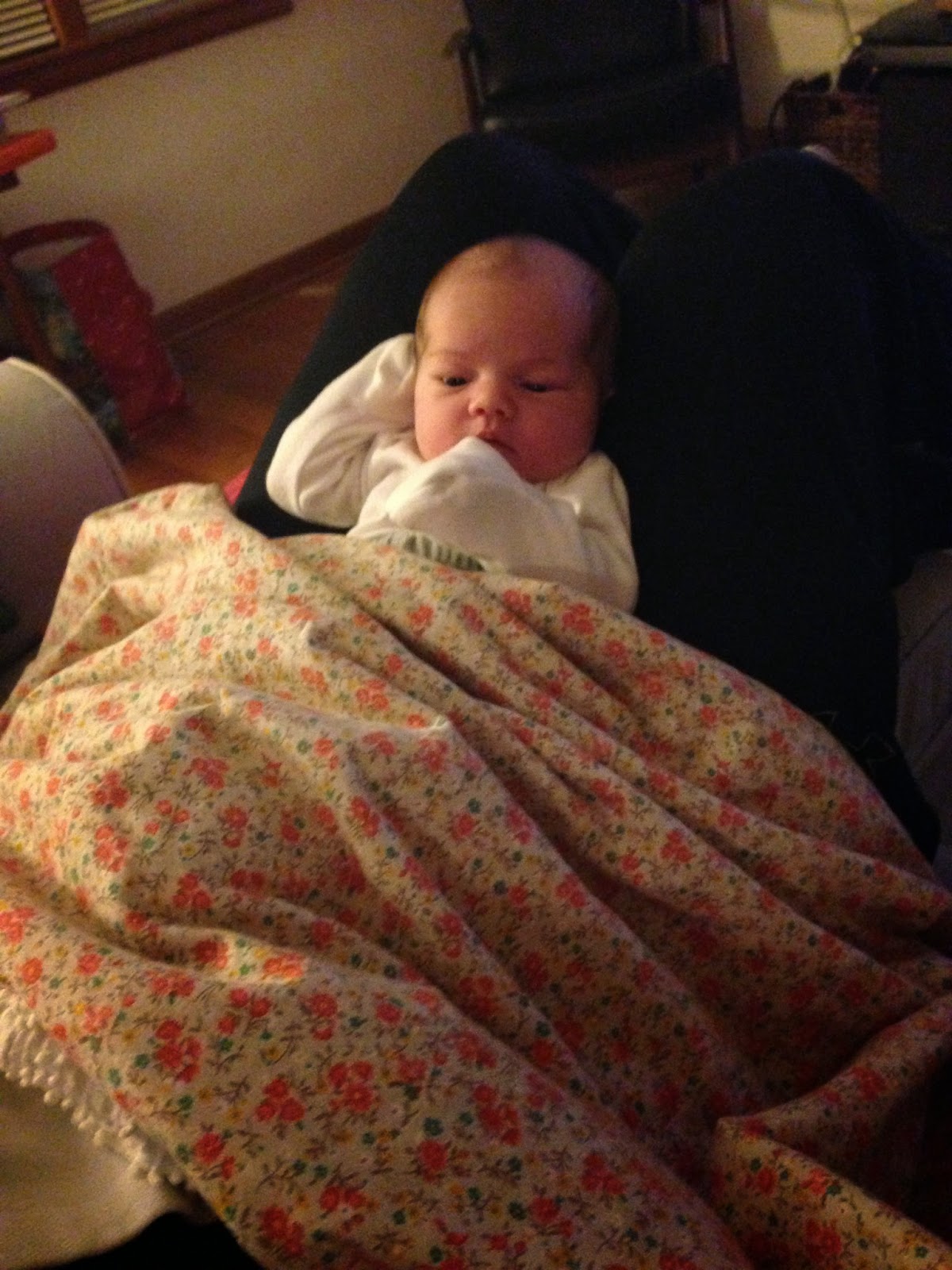 This picture was taken late one night while we were nursing.  Right after I took it M tossed her cookies on me.  I then went to change her diaper and she peed while I was in the process which meant I had to change her clothes, too. After that we nursed some more and cookies continued to be tossed. I was grateful I had this adorable picture to remind me of the nice quiet moment we had before it all went awry. I'm learning that is also a big part of parenting - sweet little moment followed with vomit and pee- metaphorically and literally. 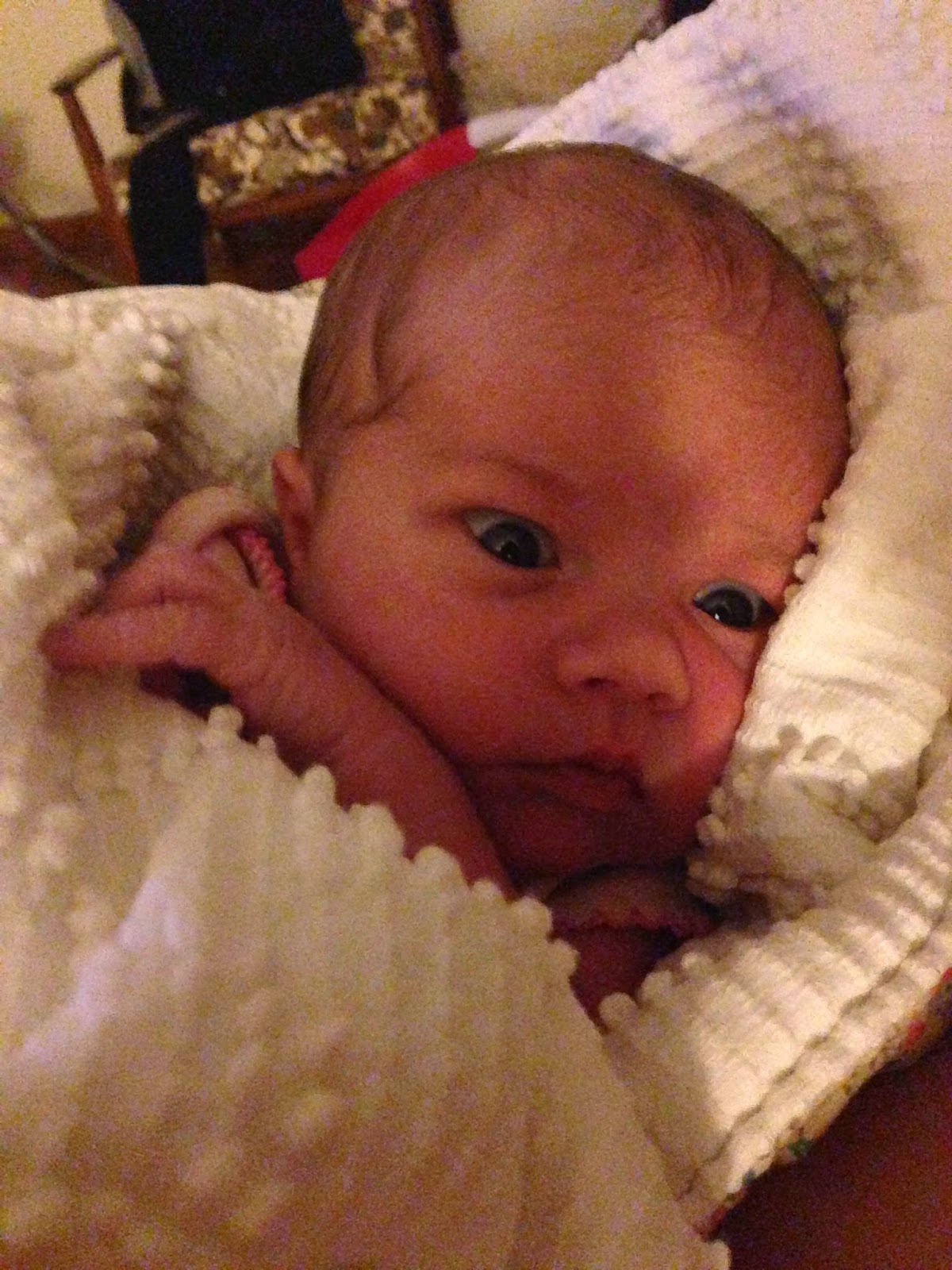 Upside down baby. She's so serious. 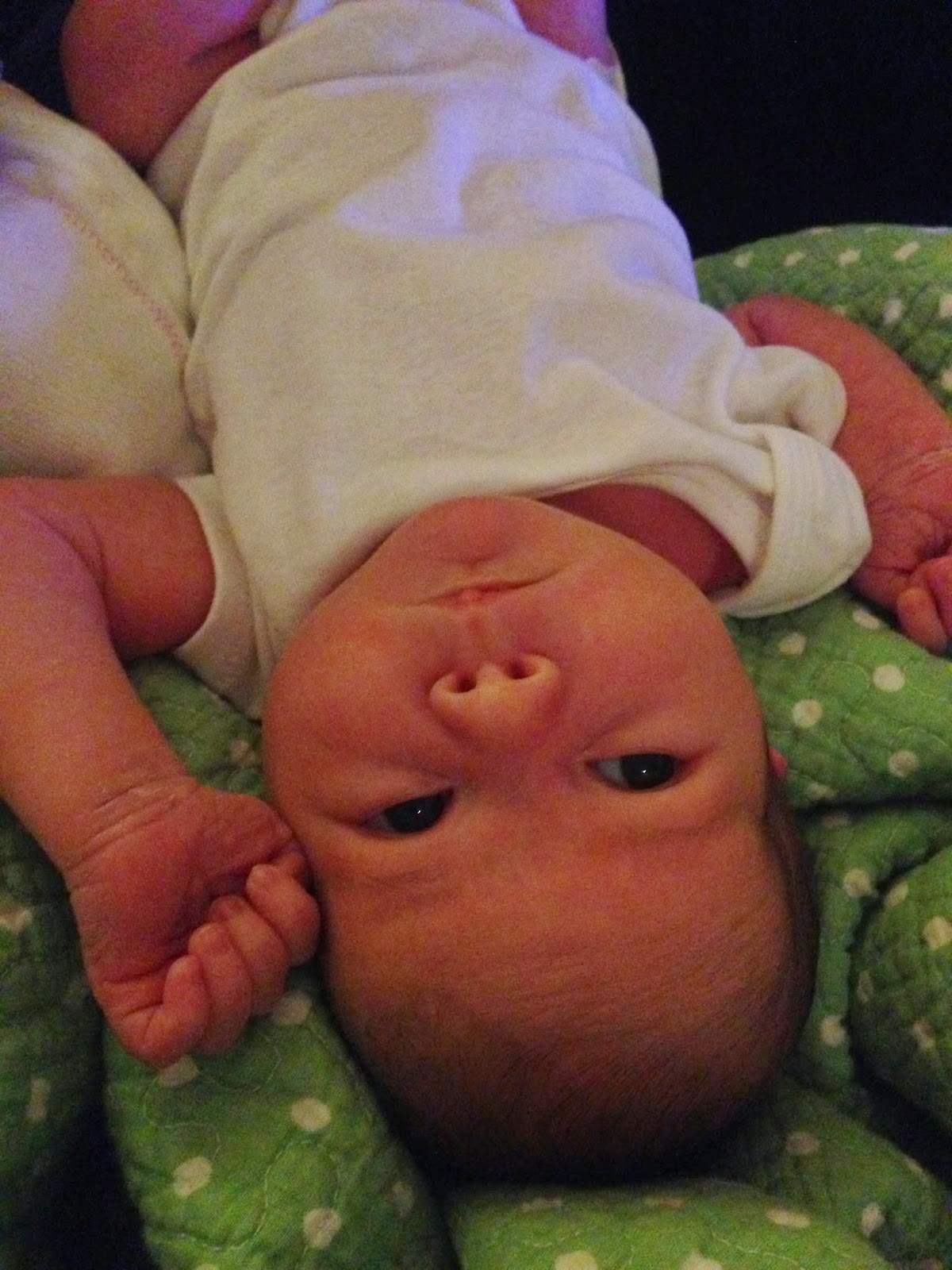 We spent Christmas all alone, just the three of us. My Mother-in-Law had the flu so we had to postpone M's first big holiday.  I had imagined I would still wrap her two gifts I bought her and would make a big fuss of opening them for her but it was such a sleepy, lazy day that the most we did to celebrate was to wear a fun Christmas shirt.  It was all we needed. 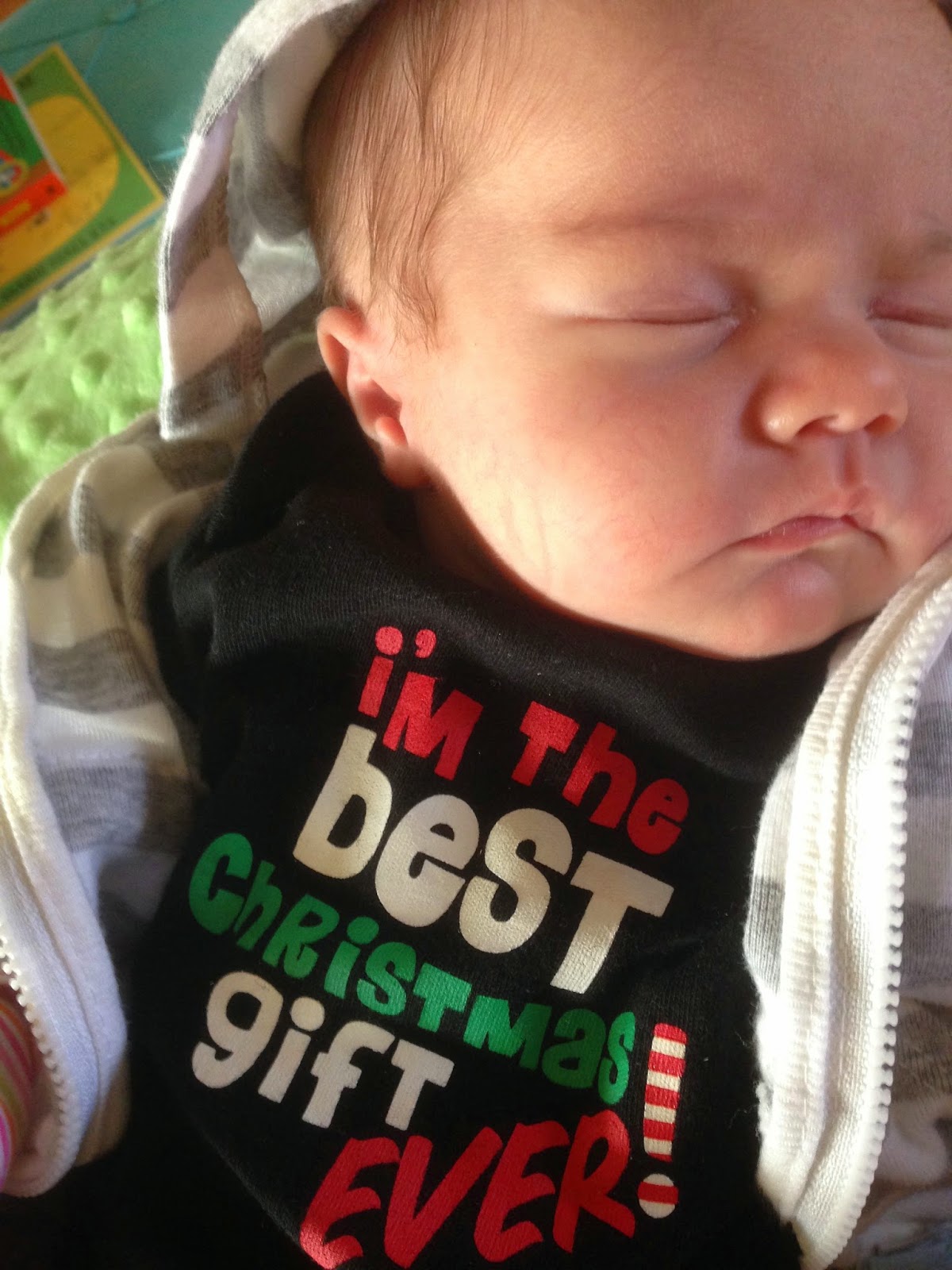 Today M needed to sleep off all the sleeping she did the day before. We have been trying out her new swing and I have been trying to not hover over her too much.  What if I didn't put it together right? What if the mobile falls down on her?  What if she starts spitting up and chokes?  These are all the worries I'm working on.  But I still sat close by.  Not all worries will go away so quickly. 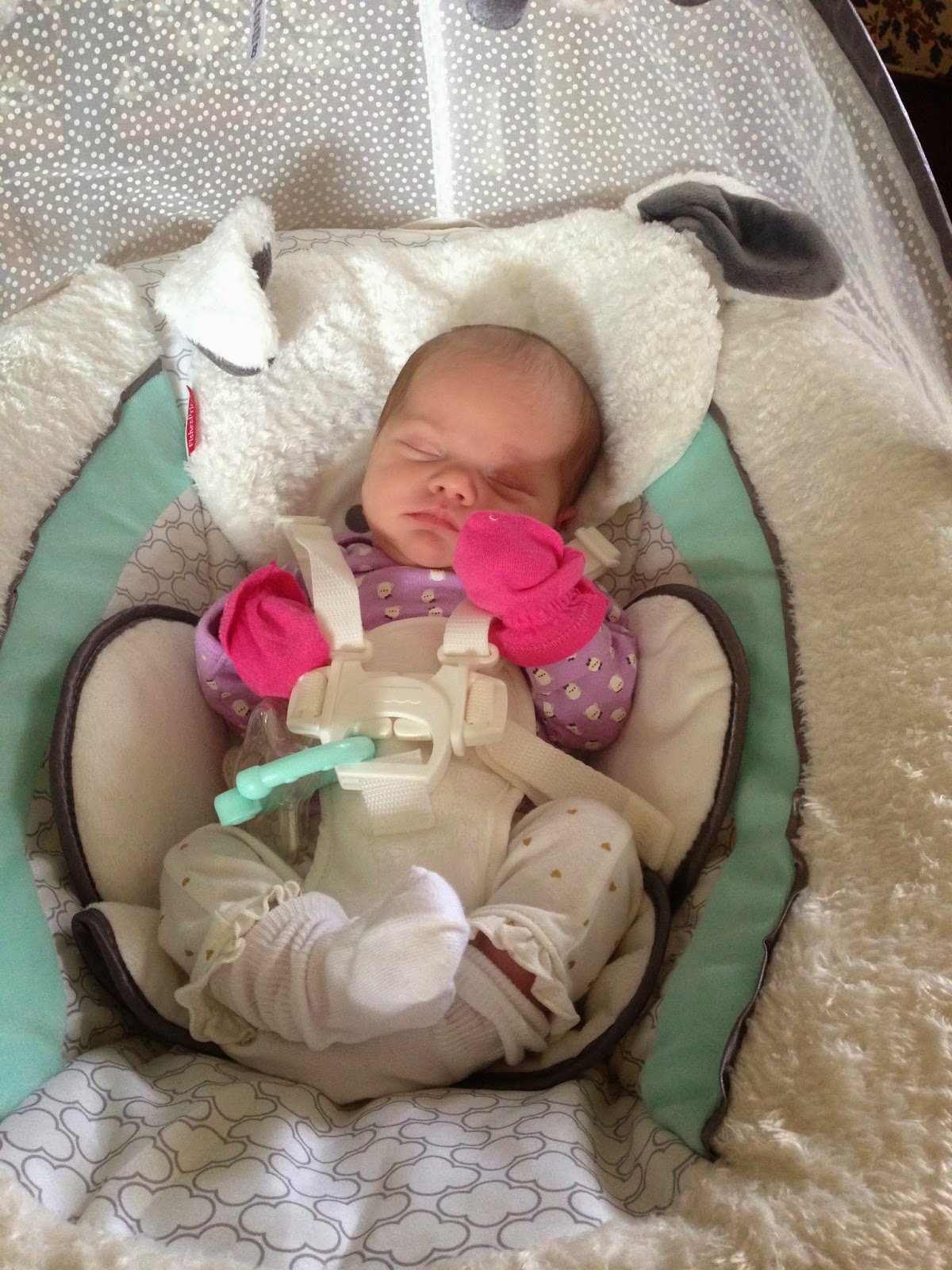 And now she's ready for second dinner. Which will be shortly followed up with first dessert.

Love it! You are going to be a Great Mommy!!! She is precious!!!