I didn't want to post again until I had something truly interesting so show you... but that was going to possibly be forever... so here is what's going on in the meantime....
I had this idea to grow my own crystals. I wanted to make magical little worlds in tiny jars.
This was my first attempt with different kinds of recipes. The large green jar was with epson salts and it actually worked. I grew small needle like crystals. But they are so fragile I'm not sure what to do with them. The blue one was a total dud and the orangey one sort of worked but I was underwhelmed. 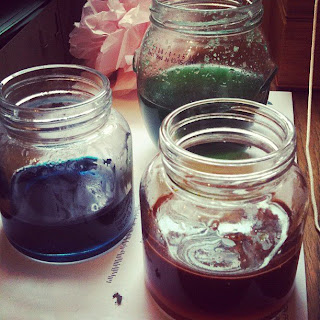 So then I tried a new idea with just salt and water. Again, they were mostly stinkers. 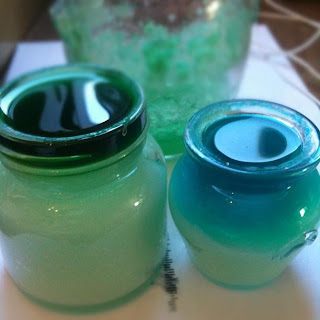 So! I sped things along and just stuck these crystals quartz into the salt jar. It made for a nice picture but it was a very very temporary solution. 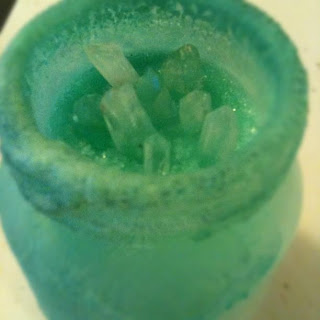 I tried a couple of other things but I'm not in love with them either. I think I am in a situation where I have an idea in my mind but I'm having trouble translating it to real life. Darned real life!!
So here is a pic of a million things coated in glitter. Glitter has never let me down. 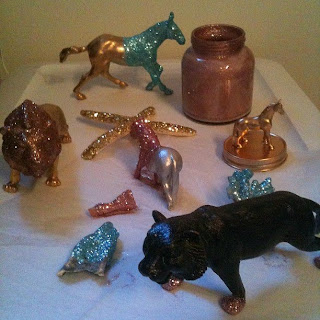 I have been quite a mad scientist. I think I'm ready to sit down at my drawing desk and work on some watercolors...
Posted by A Beautiful Party at Monday, February 20, 2012

Have you tried adding bluing and ammonia to your concoctions? I know the bluing is colloid so it is kind of a starting point for the crystals. And ammonia makes them grow faster!