I recently listened to the latest After The Jump podcast titled Organize and Simplify where Grace Bonney and two of her co-workers talked about things they were doing to mentally and physically de-clutter their lives.  I found this episode so useful because I am certainly feeling like these are things I need to do in every aspect of my life.  I am also noticing this seems to be a trend for a lot of people which is very interesting and makes me wonder what could be the cause of that.

Right after World War I an art movement called Purism began to take place.  It was led by  Amédée Ozenfant and was visually similar to cubism but was a lot less fussy.  It's the kind of art that would make a non-art lover mad when they see it in a museum and they would rant that their kid could make that.  Well, yes, maybe so. But what is interesting about Purism is the psychological aspect.  WWI was a very messy and brutal war that took a toll on a lot of people. To deal with all the emotional baggage of the war artists were making this kind of work as a way to visually clean things up.   This is sort of a realization after the fact and I think it's fascinating.  It goes to show that art may look simple and childish but often times it's the content or the "reason why" that elevates it to another level.  It's the idea of Purism that makes me wonder if there are things happening in our world that is pushing people towards de-cluttering and becoming much more minimal in their lifestyle.  I'm sure the biggest culprit could be the declining economy.  Maybe we are embracing a lifestyle that doesn't rely on money and  instead are focusing on quieter things.  Whatever it is I like it.
My gal pal Bryanne, who I've written about before, has been a huge inspiration to me when it comes to de-cluttering.  Every time I step into her home I gasp.  I can easily count every object in a room and I can see how truly special each object is because it has its own space to exist.

A few plants in the windows become magical when the sun shines in.  She has found a way to be surrounded by beauty and I admire that so much.


I have this shelf in my living room and it is currently my favorite part of the house.  I have my rock collection lined up with a few more trinkets. Our wedding picture hangs on the wall.  I plan on spending the next couple of days cleaning my house from top to bottom and this image is my jumping off point for inspiration. 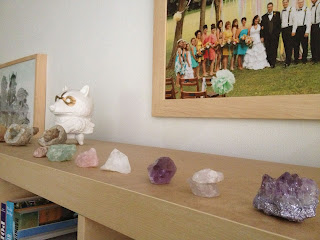 In some ways it will be very easy for me to scale down in the amount of stuff I have because I'm so motivated by all the people who are living their lives this way.  I'm excited to keep only the very special items and clean up all the clutter.  In other ways this will be hard because I have always been a pack rat by nature. I found these old pictures to share of several places I have called home.

Look at all the stuff!! I was so proud of all these things. I had Pez dispenser collections, tin lunchboxes, pictures of friends, toys and toys and toys! The following two pictures were taken when I was in my teens. 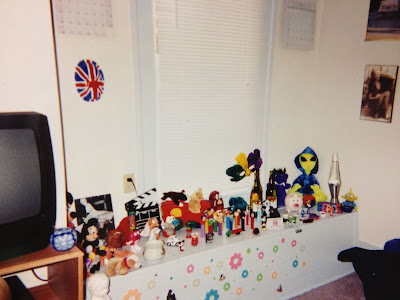 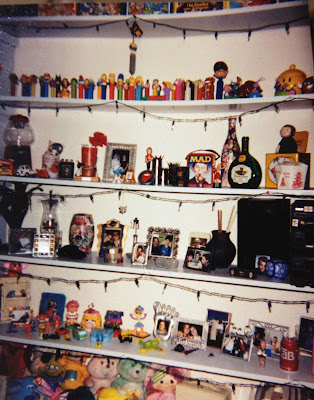 This is also from my teens, probably 17.  Please note that the shelf is not as cluttered as the one above. Obviously this was my minimalist phase.  Also, check out all those Sweet Valley High books. I was quite literate! Plus they matched my decor! 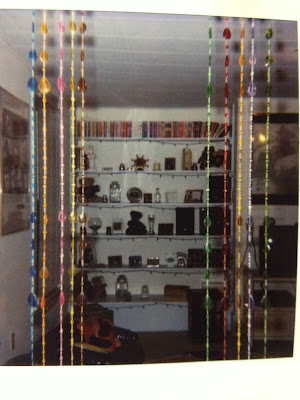 This was my dorm room.  I loved Diet Dr. Thunder and never cleaning anything. At least I had a plant! 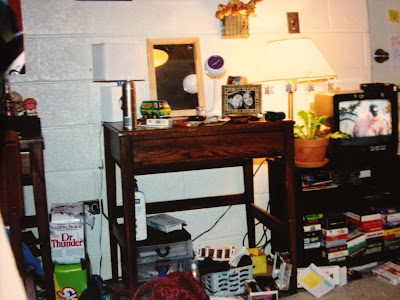 This was my favorite spot in my bedroom from an apartment when I was 22.  I loved this little corner that was filled with books and cds.  I used to lay here and listen to music and thumb through art books all the time.  And never clean. 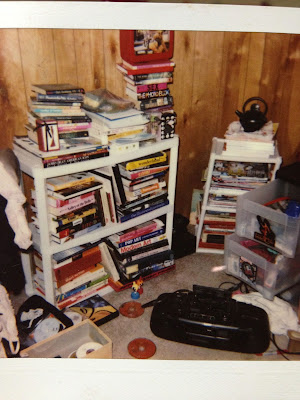 As you can see I have always been a clutter kind of girl.  I'm excited to work on changing that.  What are you into? Are you a clutterbug or super minimal?  Either way is just fine, whatever works for you.  I'll probably always have a room in my house that is throwing up stuff.  Right now it's definitely my studio!

Have a great Monday. I'll be cleaning!!
Posted by A Beautiful Party at Monday, September 09, 2013

You and I are much alike in our pull towards filling our space with visual inspiration. One thing that made me kind of sad while listening to that particular podcast was when Grace had her mini rant about how inspiration boards stress her out.
When I was younger I felt like my spaces were always a mess and cluttered. Then when I was in college and had more people over I got to see my organized chaos through their eyes and learned to embrace it the way it was. Do I still love an empty space? You bet ya! It's just not the way I work.
P.S. It's kind of interesting how sometimes I need other people's input to recognize stuff about myself. It was through other's feedback that I grew to LOVE and even recognize my home style, my handwriting, and my own general art style.

Clutter can sometimes be a world unto themselves, with all their embedded histories and memories & stuff. The reason it's distressing to even think of throwing some of them, for the mere purpose of clearing up space. I mean, there's recycling. What can't be compromised though is cleaning the space where these would be found. You can store them all you want, or discard them, there are bound to be ways, but the floors should at least be kept spotless at all costs, of which there are also ways to deal with. :)