Are you ready to have a new Dreamy, Artful Couple introduced into your life?  This couple is dripping in dreamy artfulness.  Do you ever meet people and wish that you knew them sooner?  That's how I felt with Bob and Carrie when I hung out at their studio last Friday. I could have stayed the whole day.  I loved seeing their work and hearing them talk about it.  The way they worked together was sweet an their studio space was filled with so much colorful inspiration.  The first time I walked into their space my jaw dropped to the floor.  Carrie Schumacher has created rows and rows of monsters made of buttons and fabric and paint and many other whimsical materials. I was also confronted by her large sculptural monsters that are cute but also ominous.  My favorite kind of monster.
Bogumil Bronkowski, Bob, takes up the other side of the space with large paintings that tell tales of another place.  Bob mixes stories of his own life with stories that come from Poland, creating his own fairy tales, all the while using all my favorite colors.
During my visit Bob kicked a softball around while Carrie sat at her table sewing on a monster.  Carrie said this is their typical dynamic.
Check out their work and interview.

How did you guys meet? Was it artsy dreamy love at first sight?
Bob: I guess, since we met in art history.
Carrie: You don’t seem so sure.
Bob: How so?
Carrie: I guess!? I thought YOU thought I was the most beautiful girl in the world when you first saw me. You went home and told your brother about it.
Bob: Yep. Caught red-handed.
Carrie: And you sat near me in that art history on purpose because you were too scared to talk to me and you hoped that I would talk to you. Which I did.
Bob: Mmmm-hmmmm. And it worked.
Carrie: And I asked you out.
Bob: You asked me out after you ran and didn’t want to see me.
Carrie: And here we are 6 years later.


Do you two like sharing a studio space together? How do you think it informs your work by working so closely?
Carrie: It has its benefits and its challenges. We are currently out of space, and that has been an issue.
Bob: It’s easy to bounce ideas off each other. You don’t have to wait for a crit.
Carrie: That also means someone else is ALWAYS looking at your work, even when it’s in its awkward teenage phase and you yourself are wondering if it’s going to make it out alive. But it never gets boring. Sometimes we play soccer.
Bob: Sometimes we dance and have dance parties.
Carrie: There’s always someone there who understands and can support you and give you a moral boost.
Bob: We tend to use the same colors sometimes, unintentionally. Then we look at each other’s space and there they are. We also use the same forms.
Carrie: Themes and elements from Bob’s work will definitely show up in mine, and vice-versa. It’s definitely unintentional, but we spend so much time in our studio, and our work is our visual cultural landscape. Of course we’re influenced by it.
Bob: It’s bound to happen 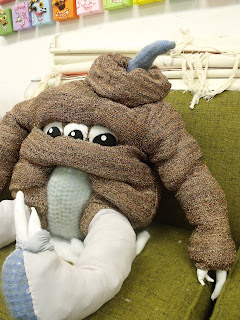 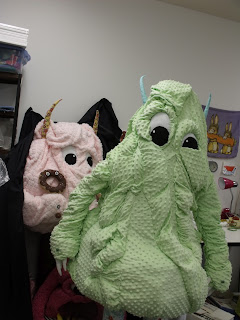 Do you two every collaborate? If not, any plans to do so in the future?
Bob: We just did a collaboration that will end up in my thesis show.
Carrie: It was weird.
Bob: It’s tough to collaborate because we have such different styles and ways of working.
Carrie: Our piece just turned out really weird. I don’t think that would bar us from working together in the future, but I think we both have very strong opinions about how things should look, and they don’t always agree.
Bob: I’m sure there will be more collaborations. Not perhaps in creating work, per se, but in exchanging ideas.
Carrie: He is a good sounding board. 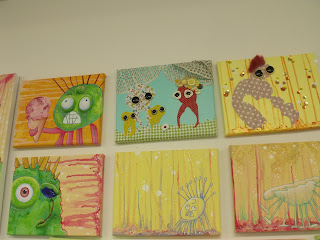 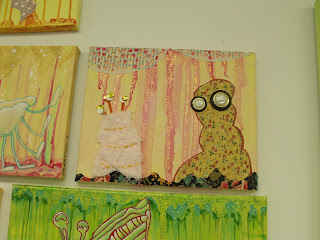 What has it been like going through grad school together?
Carrie: Hell.
Bob: Why?
Carrie: Not because of you. I’m sure it would have been a lot worse without you. I just think the schedule of grad school has been hellish. I am glad I came to Northern instead of SAIC, because I don’t think I would have made it through without you.
Bob: Heck yeah, because its a lot easier to have someone here to start with, than having nobody and trying to find people you can mesh with right away.
Carrie: It was so lonely at first. Remember how much I wanted to leave?
Bob: Yeah...But we stuck it out. And it turned out fine.
Carrie: And now I don’t want to leave.
Bob: Me either.


Carrie, tell me a little about Bob's work...
Carrie: Bob’s work discusses the hybridity and duality of being an immigrant in the United States. It explores the fluidity of national identity and the ever-shifting context of home. Bob has always been an amazing painter. To be frank, I’ve always been rather jealous of his skills. He understands paint as a material in a way that I never will, and because of this, he can be really bold and experimental in his studio process. He’s a a risk taker in his work. The progress he has made during his time at Northern has been astounding.

Bob, tell me about Carrie's work...
Bob: Carries work in simple terms is about friendship. What it means to have friends and loved ones and how to deal without them. She has decided to create her own friends who will always be trustworthy, loving and supporting till the end. She treats her creatures more like family and literally gives birth to them. She is a caring person who has also grown a lot at Northern, changing her direction from Time Arts where everything had to be very conceptual to a more image based way of making art. She has pushed her art very far by not being afraid to try new things or methods and always challenging what is high art. 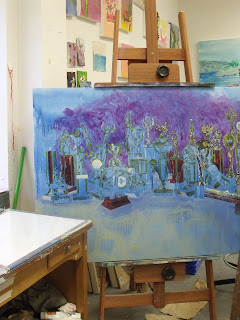 What's next for you two when you graduate and move your studio home? Are you excited? Any future art plans?
Bob: I don’t know...Try to make a living, and continue creating art, in our living room. Find a job for me.
Carrie: I’m not particularly excited about the future right now. Hopefully, next year we can move back to Chicago.
Bob: Moving back to Chicago and finding a job sounds good. And we’ll get into all the shows!
Carrie: Gallery representation!
Bob: Yeah! 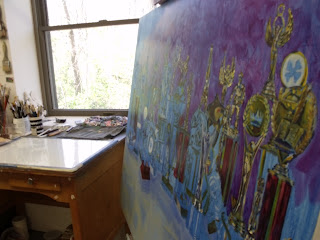 In a few weeks you will see more of these artists as they have their thesis show coming up and I plan on doing a post of each of them. It will be exciting to see their work installed in the gallery.  Keep up with what Carrie is doing here.  Also see more of her work here including her famous paper dresses.
Find Bob on Tumblr here and see his website here.