Party In A Jar!

I sort of feel like I just had my "Oprah Ah-hah! Moment."  I've been working like mad trying to get more and more and more done before the upcoming sale.  Many of my animal jars have been filled with glitter but I have a lot that I would like to keep clean so I hoped to come up with an idea for things that could go in the jars.  Sometimes when I need inspiration I go to the party store and walk around.  I love that place and all it's wonderful party trinkets.  Finally it occurred to me that that is what I should be filling these jars with.  Each one has supplies to have your own mini party for one with a few things you could share with a friend.  I'm super excited to be making these and am kicking myself for not thinking of it sooner.  As soon as I can get some great photos I'll put some in my shop.  Meanwhile if you're interested in a party jar get in touch with me for details.  Each jar is slightly different though they all contain a few balloons and noisemakers. 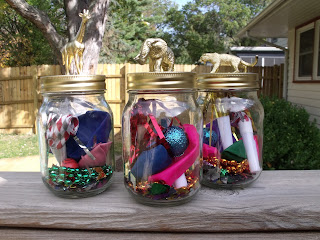 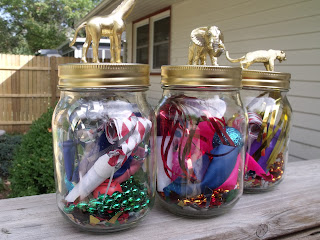 Making these and finishing up my other jars means lots of spray painting. I can't wait to take a break from the fumes for a while and do something healthier like watercolor paintings or sewing. 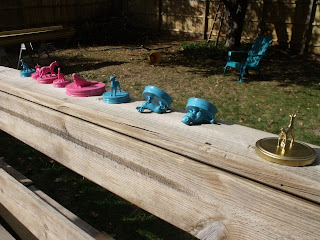 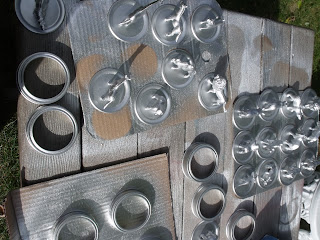 Keeping me company outside is my new rabbit Rue.  When I adopted her her name was Blanche but I didn't feel like she was a Blanche at all. She's so sweet and cuddly with a little bit of sassiness.  I figure her previous owner named her after Blanche from the Golden Girls so I opted to name her Rue after the amazing gal who portrayed her.  She and Lux are not NOT getting along but they aren't best friends yet either.  I feel optimistic.  I think Lux really likes her.  I guess she is more the Rose of this friendship to Rue's Blanche.  The cutest thing in the world happened a couple of times when we put the bunnies in their outdoor pen.  We seem to have a tiny yard rabbit living outside so when the bunnies are out the yard rabbit hops around and hangs out with them.  It's like a Disney movie happening right in my yard! I haven't seen the little rabbit lately and I hate to think what that could mean. Hopefully she found a new group of rabbits to hang out with. 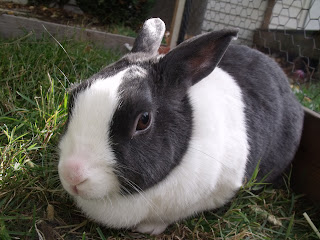 Time to get back to it.  Have a fantastic day today!

A fenced in backyard with a mini animal kingdom and party jars, I want to come live with you! Your sale is going to be so awesome, good luck! The party jars are wonderful, and match your aesthetic for sure.

Love the party in a jar!! Maybe you could also make teeny purse versions?! For boring train rides and stuff. Suuupah cute rabbit!

Also, the party jars are very clever. People will start buying those in bulk for weddings, barmitzvahs, quinceneras, all that fun stuff.