Since I've been at my parents' place I've been a little on the lazy side. I brought some good paper and drawing supplies with me but I've mostly been doodling. I have, however, been catching up on my new favorite show Mad Men. It started innocently. I finished the last disc of season one before I came home. Since I can't get my netflix here I thought I would download only one episode just to see what was going to happen in the next episode. After watching that episode I thought I may as well buy the next three from Itunes so I wouldn't have to get the first disc of season 2 from Netflix. Now I'm on to episode 8 and I can choose to stop there... but with seven more days to go here I feel like I will end up watching the whole season. I did get a gift certificate to Itunes. 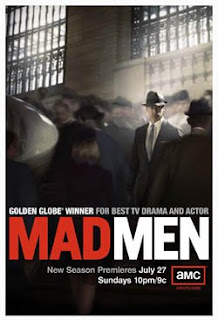 Have you seen Mad Men? I feel like most people know what it is by now. It's so beautiful and glamorous but I sort of hate the main character. Maybe I'm suppose to hate him. I read a good article in the latest Bust magazine about the Mad Women of the time. I think advertising could be an interesting job. Does anyone remember Amanda (Heather Locklear) on Melrose Place? She was in advertising and was probably a female version of Don Draper. Is that a horrible connection I just made? Sorry, pop culture. 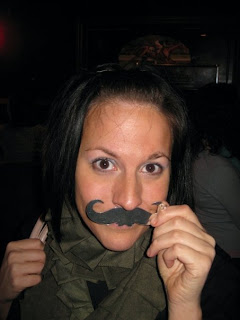 Another thing I'm loving is my new mustache necklace made by one of my best friends, Cameron Cox. She whipped up a different mustache for each of my friends and we wore them when we were in Clemson for my other best friend Claudia's show. Third best friend Janey was there also. Claudia's art show was beautiful. Her work has grown so much since we were in undergrad together. For some dumb reason I didn't get any picture of her work installed. We barely got to the show before it was over. Waking up at five in the morning and driving straight to South Caroline from the Chicagoland area was rough and pictures were a little far from our mind. I bought a piece from Claudia that was sort of a collaborative piece. I drew images and she shot them into a screen and printed them. I think it's called Nerds with Nerves and it's about how she and I both love parties but we also have a touch of social anxiety. We have to find ways to make those two things work together. It's a neat piece and when I have it in my possession I will photograph it and post it here. I realize this was suppose to be about the mustache necklace and it went this way.... sorry, Cameron. I love the necklace!

I was also going to make a list of artists I like but I feel like I've already written a book that would rival War and Peace in length. Guess I'm making up for lost time. Today I will compile a list of artists and images and will be ready bright and early tomorrow with a new post. I also go to the dentist tomorrow. The post will be the best part of my day.