Dreamy, Artful Couple with an extra dose of Charm

I have wanted to do a post on this dreamy couple for a while now. Their relationship and their work is like one big mixture of a yummy party punch. Is it life imitating art imitating life? I don't really know what that means but I think it is... It's Joanna Goss and Don Picton! 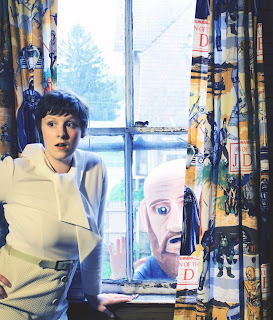 I did an interview with this cutie-pie couple. Sit back, relax, read and look at all this eye candy!
I did their interviews separately so it may seem a bit disjointed. Never you mind that. ( :
1. Was it dreamy at first sight when you saw Joanna? Did you know that one day the two of you would be the dreamiest?
Don: Yes it was, her hands were covered in paint and plaster of paris or other such pasty substance. not in a million years did i think that.
1. First things first, Joanna... How long have you and Don dated? Was it dreamy at first site?

Joanna: Two years this november. i had a good idea when i met him, but it was on a walk in the woods wherein don presented me with a tiny, dollhouse-sized notebook in which he had chronicled our activities and dates since the very first one in superfine micron. i was obliterated by the dreaminess of this present. it was over right then and there. 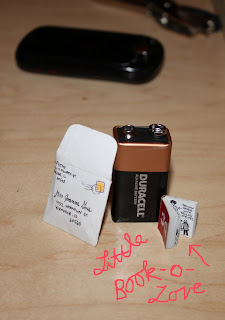 Don's present to Joanna.
2. You guys work on art together a lot in the same space. How do you manage to make this work peacefully?

Joanna: Don can work super late into the night while i go to bed so that i can rise early and hit the studio first thing. somewhere in the middle we converge. don's got a canon of burned seasons of undeclared, strangers with candy, party down, freaks and geeks, to make art to. and i try not to talk a lot.
2. You're someone who is ALWAYS making art! How does your relationship affect this? How do you keep the art and romance alive?
Don: We both have 40 hour a week jobs, so getting in equal parts for relationship and work time sometimes leaves little time for sleep. also we try to work at the same time so it's kind of like killing two nerds with one stone. 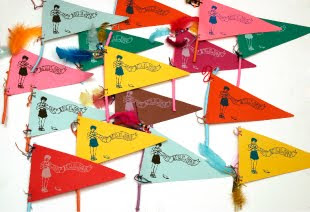 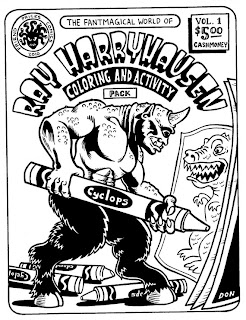 Don's Color and Activity Book
3. Tell me about your collaboration work the two of you have done.
Don: we put out a mini comic zine called comparratives, chronicling our lives before we met. i usually consult jo about colors i should use, since if it were up to me evertything would be grayscale. also we've been doing saturday afternoon photos lately.
Joanna: we are both stupified/satisfied by regalia from bygone ages. dons more comic books, action figures, video games... i'm like handi-crafts, knick-knacks and clothes. so this stuff informs the colors we work with and the subject matter pretty much every time. and since we both have an appreciation for minis, we made a small scale diorama of ourselves at work in the studio and sent out photos as our christmas card this christmas.
our interests and aesthetics are a pretty great match so don built this booth to take to craft sales and from it we can hock our handmade wares, sort of concession stand style. we love to recycle old craft recipes from the 50's, 60's and 70's, like homemade kaleidoscopes and string art and sew hilarious, kitsch-shaped animals from old patterns.
we just really value the handmade object and try to offer up something cool, as often as we have a good idea, to anyone we meet with the hope that it'll serve 'em well. we also wish to spread the message, "take time out to make stuff." 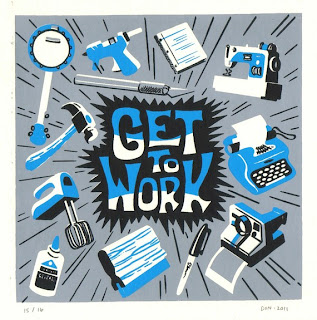 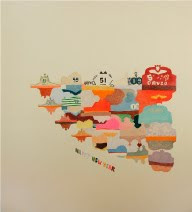 Joanna's Work
4. Joanna, would Don rather eat nothing but Doritos breakfast, lunch and dinner for a whole year and nothing else OR only eat his meals in the form of a pill for three years...?

Joanna: Lunch and dinner for a whole year and nothing else. 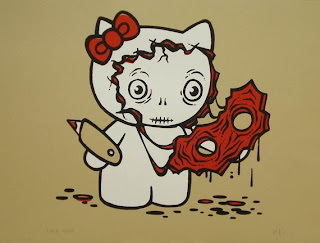 Don's Work
4. Don, would Joanna rather shave her head and keep it shaved for a year or wear nothing but Tommy Hilfiger tee shirts for two years?
Don: ha, shave her head, i'm still waiting for the day i see her and she does it without having to be swayed by super rad fashion templates. 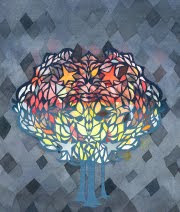 Joanna's work
5. What other dreamy artful couple do you admire?
Joanna: eric yahnker and alison schulnik. i think they're a couple. they might not be. in fact, if they saw this it might make things weird. but i've seen them together a lot in photos and they are, respectively, wildly productive and seem to be pursuing their creative lives with spicy zest. don and i are both big admirers of the style and ambitiousness of ray and charles eames.
Don: jack kirby and stan lee 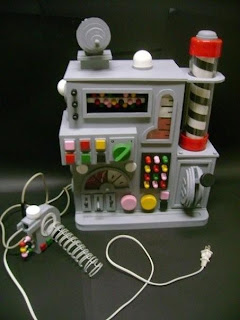 Joanna: He showed me the best possible publication of arts n crafts book ever made (The Family Creative Workshop), speedball @ home screen printing techniques, how to sew--don lends me his sewing machine regularly, how to fix things sans pouting, and i've picked up a ton of comic book and zine knowledge. 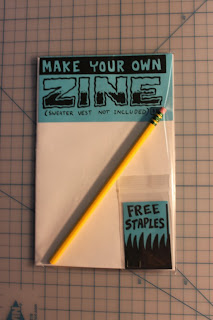 Don's Make Your Own Zine Kit 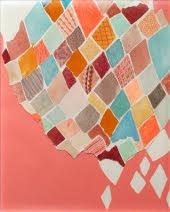 Joanna's Work
7. Don, if Joanna were an animal what would she be? What would you be?
Don: joanna would be the elusive northwestern united states spaz sugar glider, i would be a badass raccoon with a cape.
Joanna, same question...
Joanna: My best guesses are a bat or a mole and i'm a pairiedog.
8. What's next for you two?

Joanna: Shackin' up! Re-wall papering. his and her chip clips, negotiating cupboards and drawers. you know.
Don: a place together with a garage and enough studio space for us both. lots of zines, screen prints, clothing, and the 2nd aurora alley fest. 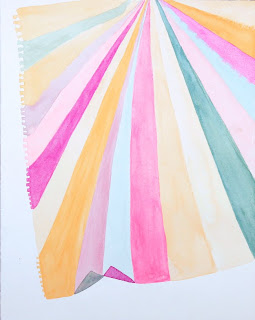 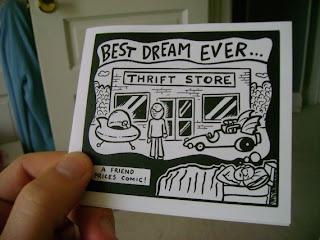 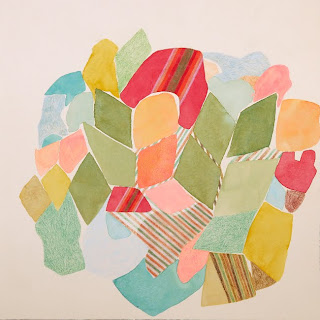 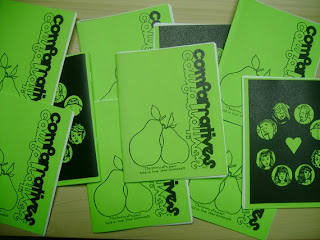 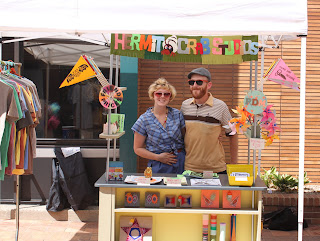 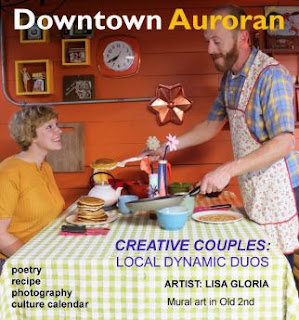 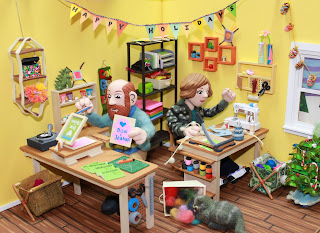 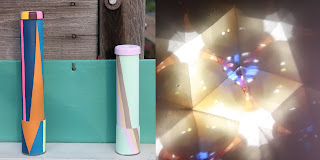 Joanna and Don's Collab Kaleidoscopes.
See and buy Don's work here. See Joanna's work here. She currently has an inactive etsy shop but keeping checking back because it will be filled with goodies soon. If you are near Aurora, Il check them out in June at the Aurora Artwalk.
Posted by A Beautiful Party at Monday, May 16, 2011

Wow what an inspiring couple! I'm looking forward to explore the links to there work.

What an interesting couple!!! I also love doing interviews, with people with really amazing and inspiring jobs. It's always fun to get to know more about amazing people in this world! :)

What a sweet interview! Learning of that little notebook made my heart melt a bit {plus, how cute is it!??!}

Hey there! Just discovered your blog today ~ Love it! :-)

thanks, guys, for all the great comments! Joanna and Don are such a wonderful couple!
If you are new to my blog, Welcome!! I'm so happy to have you here!