Dreamy, Artful Couple with an extra tablespoon of Artful

Sorry it's been a while since I last posted. It's been busy times with a new job that I'm slowly adjusting to. Plus some great personal stuff going on in my life but more on that later.
Right now it's time for a new dreamy, artful couple for you to feast your eyes on.
I met Chris Wallace and Linda Santana at Frogman's Print and Paper Workshop, where real magic happens. I fell head over heels for this couple immediately. They are both super talented and so darling to be around. Now to share them with you. Take a look at their work and see more from Linda at her blog . Chris doesn't have a websites so please leave comments begging Chris to get a website up so you can see more of his dreamy work.
Like the last time I interviewed the couple separately so it may seem a bit disjointed.... Here goes! 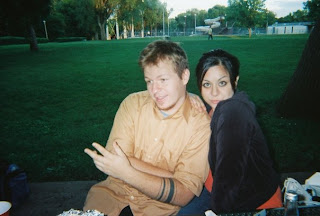 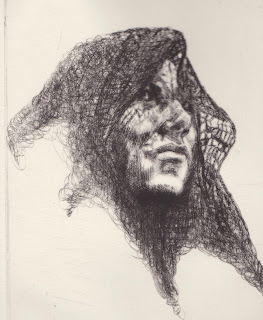 1. I have known you both for several years and you have always been together and seem made for each other. How long has it been? How did you two meet? Was it dreamy love at first site?

Linda: We met in 2002 and we’ve been together since January of 2003. We met through a mutual friend at a psychobilly show and I relentlessly pursued Chris for 4 months before it was official. For me it really was love at first sight, look at him :) (editor's note, I'm not sure why these two images where at the end of Linda's answer but I found it pretty charming. wing dings are the best.)

Chris: We meet through at a mutual friend who was more or less playing cupid, It was indeed dreamy, but also equally filled with awkwardness. 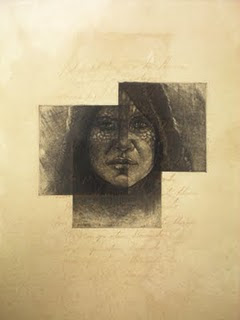 2. Were you both artists at the time or studying to be?

Linda: I was in my last semester of high school and at the time I had the equivalent of 8 years worth of art credits somehow…and Chris was really into painting. We were definitely both on the artistic track when we met and it was something we bonded over. He started printmaking at College of the Sequoias a semester before I did and when he would visit me in Santa Cruz he smelled like lithotine so I have a fondness for it.

Chris: I would say so, art did play a role, we always enjoyed looking at art together and drawing. 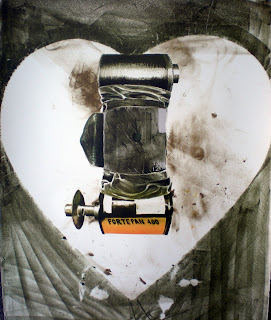 Chris's Work
3. You both attend the same grad school. Was it important that you both went to the same place?

Chris: As for graduate school, we were not dead set on being in the same program(mainly because it of how rarely that occurs), or even both going at the same time. We did apply at different schools, and made an agreement on what to do if one of use got a fantastic deal. More or less, ether one of us was prepared to help the other one out in case only one of use would go. So getting into the same program, was really the best situation we could have asked for.
Linda: It was really important for us to go to the same graduate school. I went to UC Santa Cruz right out of high school and Chris attended a community college. He transferred to the Kansas City Art Institute when I graduated, and I moved with him so we’d never really been in school together. We just finished our first year at the University of North Texas and it’s been great working side by side. 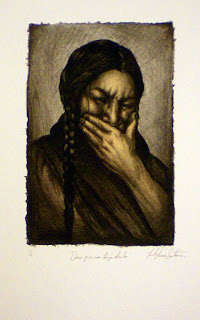 4. How are your dynamics working together in the studio? Can you go to each other for feedback or is there an invisible tape line separating the room in two?

Lindda: We work really well together, we are also very honest and respectful with our opinions and bounce ideas off each other. We share most of our tools and equipment and our personalities really compliment one another in the studio- I’m more organized and remind Chris of deadlines, and he’s a great motivator and gets things done.

Chris: We are pretty independent for the most part when it comes to our studio practice. We do give each other feedback, mostly on formal issues, and we give very honest responses. 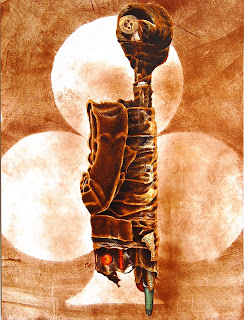 5. Do you two ever collaborate?

Linda: Our work is deeply personal and very different, as are our aesthetics so I never really thought of collaborating, I think I would drive him crazy because I can be super bossy! I won't rule it out though.

Chris: Conceptionally speaking we haven’t, but we had help each other with projects. On example was last year Linda and i carved a 4x8 foot woodcut in 3 days, the drawing was mine, but both of us considered that piece collaborative.

Chris: I not sure, something zany no doubt.
Linda: We have two more years of grad school and hopefully, we’ll get married the year we graduate, it’ll be our 10 year anniversary and I’m not getting any younger! We’ve talked a lot about going back home to California as well, I’m very close to my family and I get homesick often. 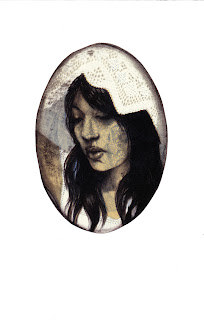 Linda's work
7. Chris if Linda was a bag of chips what kind would she be?
I think Linda would be those fancy purple tortilla chips you would find at an organic grocery store.
Linda... same question about Chris....
Linda: He’s all that and a bag of Fritos.
8. Linda, would Chris rather have rancid bad breath (the kind that makes all your food taste bad) for a year or give up litho for three years?
Linda: This is a hard one! He loves litho, I mean, REALLY loves it, but he’s the sweetest guy ever and always thinks of me, so he’d probably give it up just so I wouldn’t have to put up with his breath funk. It would give him more time to work on the wood and metal engravings he’s been getting into.
9. Chris, would Linda rather eat nothing but fried worms for six months or give up her favorite printmaking process for six years?
Linda is adaptable, I think she would find a new favorite. Plus she is a lover of all animal even the smelly ones, she couldn’t eat them.
You two are the dreamiest artiest! Thanks, guys!!
Posted by A Beautiful Party at Monday, May 23, 2011