As I mentioned in my last blog my friend Joanna came to DeKalb for the weekend and we documented our Saturday with the camera I'm still borrowing (I'll return it soon, I swear).
This is the beginning of our day.  We looked pretty rough so we didn't want to show our faces.  But cute summertime shoes, right? 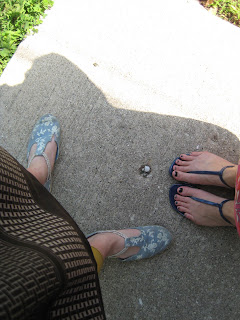 I had to go pick up my bike so we walked a long long way (ok, a mile) and got my little yellow bicycle but then had to deal with walking it back.  We each took turns riding it slowly and eventually settled on each of us holding on to a handlebar.  We sang Moldy Peaches songs about our friendship and talked about boys and moving to Portland. During the walk back my friend Jane called to see if I wanted to join her at this rustic establishment for a late lunch.  We hopped over there and got a shot of the front of the building.  Like the antlers? 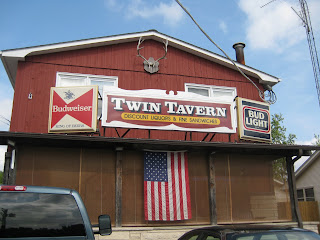 I'm trying to have a healthier diet so i opted to get a salad on the side of my french fries.  This is the kind of place where the salad is all iceberg and the cheese is neon yellow. 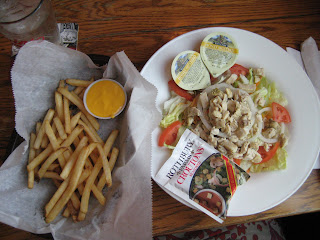 Joanna got a cheeseburger and was going to split fries with Jane but they decided there weren't enough fries so she ordered more.  I feel like french fries are a very important part of this day. 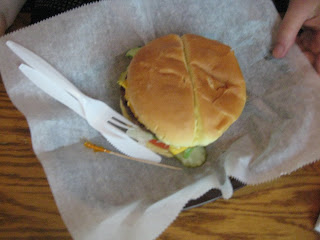 Here are the fries.  Don't be concerned by the glowing goo in the cup.  It's just cheese.  I realized I didn't get a picture of Jane and her main man Seth.  They are a cute couple and lots of fun. 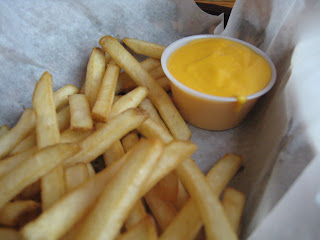 After Twin Tavern Joanna and I were going to go to my studio but it seemed so late in the day and we had plans for later so we went and got ice cream instead.  then we took a photo in front of the cutesy dated looking picture of ice creams.  Joanna seemed sad that I ate my ice cream so slowly.  She was finished and I still had a cone to go. I wanted to savor it.  Oh, yeah. Remember how earlier I said I was trying to eat healthier?  So, to get over the guilt feelings, while Joanna went home to shower I walked on my treadmill.  And don't forget about that mile to and from earlier.   I think I'm just trying to make myself feel better here.  Bear with me. 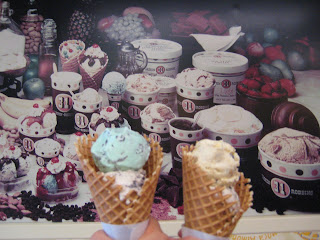 After working out and showering we got back together and took our picture to prove we looked better than we did earlier in the day.  We then went to Borders to check out an art show that was going on and read magazines.  No pictures were taken to prove this actually happened but I promise it did. 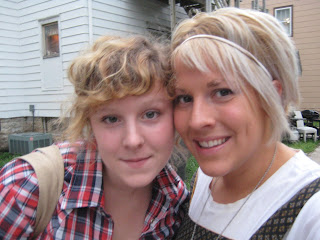 We came back to my house and watched music videos on my computer for a bit and then we headed to the local bar.  We walked, Mom, no driving... 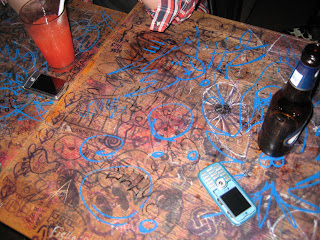 While we waited for friends to show up we amused ourselves (and probably everyone else in the bar) by taking a bunch of pictures.  These are just a couple. 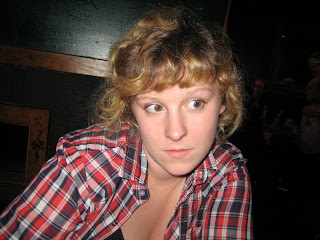 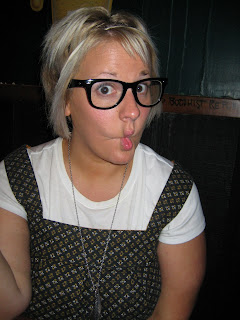 Then our friend Christian showed up!  I surprised him when I quickly snapped this pic.  I love that the Paperback Grotto is in the background.  That's Dekalb's infamous adult bookstore. 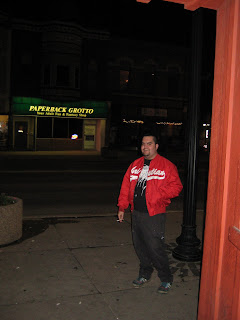 A few more friends showed up and made our night quite complete.  Afterwards Joanna and I went our separate ways only to meet up the next day when we laid on the grass and read books.  Weekends are the best! 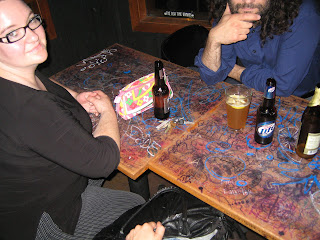 I hope you enjoyed my documentation of a sweet simple Saturday.  I want to remind everyone about my giveaway. I'm a little sad because there doesn't seem to be much enthusiasm.  Thank you to Afiori for commenting and posting a link. You are quite a dear!  Go check it out!
Posted by A Beautiful Party at Monday, June 15, 2009

aww you guys look so cute! Looks like you had fun. You had two ice cream cones?! :-D Way to go! I always wish I could have two when I'm in Rome eating gelato but I eat slower than a snail snails and they'd just melt and make a mess and I'd get full and sticky.

Ahem. As the visiting Unguilt Spirit of the Comments, I hereby absolve you of all food related guilt and regret, as long as you share your stories of awesome food places with your loyal blog readers. :D There, now you can go forth and munch with impunity!

But I'm very curious as to how you rousted up a salad at a place so invested in fries!