So I may be sort of procrastinating by writing here instead of doing work but I feel sort of stumped. It's times like these that I wish I had a crit group to work with. Or a teacher that was coming by during class time to look at my work.  But isn't that what this blog is for? Please help!
As I mentioned in my last post I found a pretty nifty tutorial for making feather garlands.  I started working on some and thought I would combine the garlands with one of my painted sticks.  So I did just that... but something isn't quite right and I can't put my finger on it.  I feel like maybe I potentially hate the look of the metal findings. 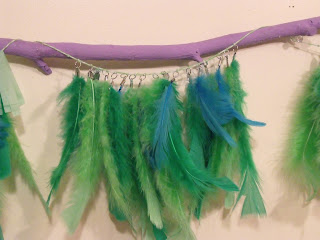 I tried to cover them up with little tissue paper banners and I almost like that but not quite. 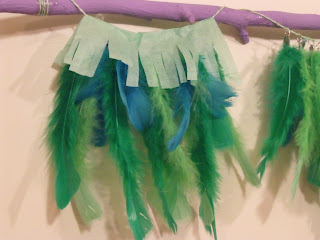 Here is tissue versus no tissue.  Something just feels off. I am also thinking that maybe the stick is just too small for the bulk of feathers.  That could be throwing everything off. 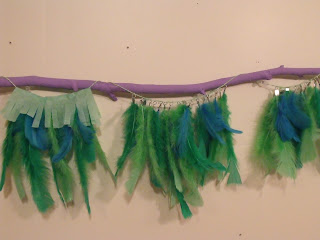 There will be a bird on the stick and maybe even two.  Maybe that will help with the balance. 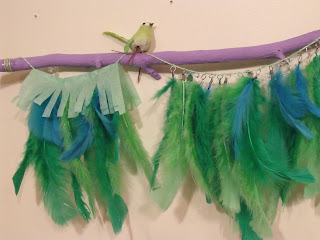 I am going to play around with hanging different types of garlands across the feathers but I thought maybe you would have some input, too. My husband told me to just leave it as is and someone might just like the feathers but I can't do that. If something feels off to me I have to keep messing with it until it's all better. But maybe that's me over thinking it.

Here are some beautiful feathers in bulk. 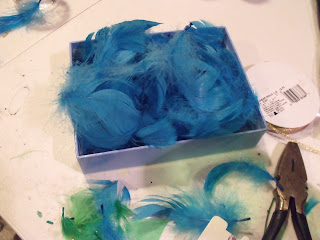 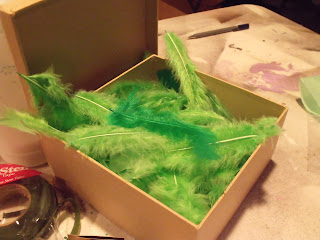 I would gladly hear what you have to say. If you think I should just scrap the whole thing and start over I'll hear that, too. But I will probably still mess with it for a while. ( :

Ten Minutes Later... an update.
I think maybe this works!  I tried to make a smaller garland to string across the whole stick but the bulk of the feathers made it awkward. But these little scallops cover the feather tops pretty nicely. They aren't glued down yet. I may get a couple of larger birds for the stick, too. I still think balance is a problem. 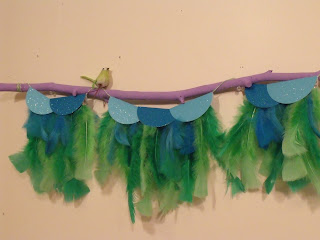 Ok but still, feedback is very much welcomed! I have to admit that the picture is not a good representation (when is it ever?) but I think you get the idea.

ooh, critique, fun! Not the scary classroom kind where the teacher berates the students and everyone is afraid to speak up for making a fool of themselves, but more like this "have you thought of trying this or that?" collaboration type critique.
I like the very first picture that is a close up of one section of feathers. I think I like it because it is just one section. I might like the whole better if instead of having the string (with feathers) wrapped around the wood that creates 3 groupings of feathers... What do you think if the string that the feathers were attached to were attached on one side of the branch and then only again at the other end of the branch? I have no problem with the metal findings either. I think I like the look of a garland that has one long swoop, rather than a bunch of secured and draping swoops. Does that make any sense? It might be hard to get the feathers to not bunch up in the center if it is one long swoop though. But, since you are using metal findings you might be able to cinch the metal onto the string to keep it permanently positioned and all the feathers equally placed. Or maybe you could use a contrasting thread color to wrap around the end of the feather and string to position it in place.
I also like the idea of the tissue paper, but what about more layers of the tissue paper like that, and then maybe another layer on top of that of something smaller yet, like letters or tinsel. So there would be 3 layers of different textures: feathers, tissue paper, and then something else. Blah, blah, blah, I had a lot to say in crit today :)

I like those ideas a lot. I am going to make another one and go in that direction. i agree with you that one swoop instead of three would look nicer. I do have each feather tied to the string so bunching won't be a problem. That is the part that takes the longest but is very worth it.
Thank you for your feedback. Super duper helpful and much better than a scary school crit. ( :

Hey Ann,
The only thing that bothers is that stick. I think it might be the color. Everything else seems to have some sort of dimension or texture, except the stick.(It could just be the photograph) So maybe changing the color of the stick?

I think the blue semi-circles look good. What about knitting or crocheting around where the feathers meet the string? That way it might integrate them.

Bob you are right and I didn't want to admit it for a long time! I finally ripped the feathers off and put them on a new stick that made more sense with them.
Hannah, I don't know how to knit or crochet! I probably will never know this fantastic skill. But I am always down for collaborations with it!