The Places You Go 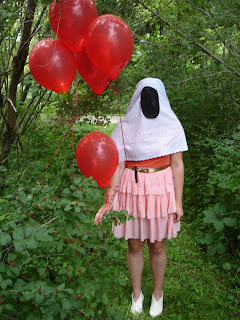 This morning I've been thinking a lot about where I'll live someday; where I will ultimately live. I grew up in a very small rural town and now live in a town a little bit larger. Chicago is next door so I have a city right at my fingertips which is great. I have one year left of grad school and then what? Where will I plant my roots? (is that the expression?)
For the past few months I really thought I wanted to move to a cool city. Portland! Chicago! Nashville! But there was always part of me that wanted the countryside, too. Sometimes when I go for long drives in the country I see lone houses and think about the people who live there, what their lives are like. Do they make art? Do they spend their Saturdays outside doing outdoor things? Are they happier?
My best friend Claudia (whose birthday was yesterday, happy birthday if you're reading this) says I don't really want to live in the country and that I'm over romanticizing it. In some ways this is true because my idea of where I want to live may be non-existent. I want to live in an incredibly liberal place and I know that can be pretty hard to find in rural towns, especially in the south. Not to say that people who live in southern rural towns are not liberal but they are fewer and far between than a place like Portland.
A friend and I talked about an artist commune that we want to someday start in the future. I know that's a very far out idea but we're pretty passionate about it so I think that could eventually happen.
Maybe I should quit fretting about where to live and focus on where I am now. But how do you choose where to go? I would love to hear from you, how did you end up where you are? Will you stay there forever? Please, share!
(by the way, the image is completely unrelated to the post. I didn't really have an image for this post but I hated for it to be bare.)
Posted by A Beautiful Party at Thursday, August 13, 2009

This is a wonderful question and I enjoyed reading your thoughts about country vs. city!

I grew up in Cleveland (city girl) while my husband grew up in Wooster, OH (country boy) where we now live. I never thought I'd want to be in the country but after living in the city my whole life, it is a breath of fresh air (literally).

You sound like you may enjoy a town similar to the one we live near. It has the best of both worlds. There is a private liberal arts college along with a great agricultural research center, so there are a lot of cultural opportunities and forward thinking folks.

We make art, plant veggies and herbs, work and play outside, but can still enjoy the benefits of the city (Cleveland, Akron and Columbus are not far away).

Good luck in finding your future digs, but also remember to always enjoy where you are Now. :)

oh oh, i really want to reply to this...maybe next week :) Enjoying the balloon photos.

For some reason your blog hasn't updated itself in my blog reader!

When I was 16 I finished my English studies early at highschool and wanted to study at a university level. Because of my age (then 17) the university in Härnösand was the only one which would give me the chance - possibly because they were told how other universities had treated me (laughing on the phone, etc). I then went to highschool (to finish my other studies) and university at the same time, going back and forth, getting up at 4.30 in the morning a couple of days a week to go to Härnösand.

And I fell in love with this town, the buildings, the fact that it's surrounded by the sea, and I started to take singing lessons and met my two "extra parents", an opera singer and an English professor. When I was 21 I moved there, to my first own apartment. I kind of think I'll live here forever but I do love to travel and when I get rich maybe I'll have an apartment in Italy or London as well :) :)

I love country life for its quiet, green garden space, and the room for large dogs! But I often feel it is less environmentally-conscious to live in the country than in the city unless one doesn't have to commute for work. Public transportation, when it works well in cities like Chicago and New York, just saves so much energy!

I also wish there were more long-distance, affordable, & efficient train travel in this country like in Germany and many other Europen countries. I get so tired of driving cross-country because I can't afford to fly!

Love that photo, by the way!