A couple of years ago I tried a weekly feature of a dreamy artsy couple that was tons of fun to do.  I would love to bring that feature back and meet new couples working in different areas of arts and maybe check back in with some couples from the past.

Kicking off this feature is my sweet friend Katy Seals and her darling beau Cody Wright. Since Katy is the first to do a studio day this year it only makes sense that she would be the first to bring back this feature.  Katy and Cody both met in Norman, Oklahoma where they both currently reside.  I've known Katy for forever and I could not wait to meet Cody.  When I did it was like meeting an old friend. The two were simply made for each other.  They are both kind and giving people who I wish lived next door to me. I would make art with Katy all day and listen to Cody's music.

Many of you know Katy as a visual artist. Cody's art form that he brings to the table is music. He is a super talented musician who is in a band called Porch Mice. Together Katy and Cody form the best honky tonk duo since Brooks and Dunn. 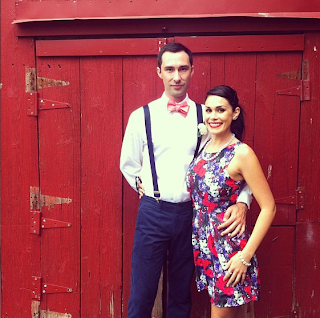 1. Katy and Cody! Even your names are dreamy! How did you two meet?  Was it love at first site?

K: I feel it was 100% extreme tween girl crush the fist couple times we met. I remember seeing Cody around town and it was simialr to the scene in Fast Times at Ridgemont High where Phoebe Cates gets out of the pool, but the boy version; he was super dreamy and interesting. We officially met at our favorite social club (formally known as Bill and Dee's, Norman, Oklahoma). Cody used to host karaoke at the bar and one night I mustered up the liquid courage to ask him to dance to a country song that was playing (seems really embarrassing looking back on it). I promptly walked up to him and propositioned a two step, to which his reply was "I'm too sweaty". This was during the dead of winter. Months later, Cody approached me while with friends at the same location and formally introduced himself and we started cracking a few jokes. This interaction led to cell phone exchanges, which led to long winded text messaging, which led to me falling in love. I remember hanging out with him and trying to NOT black out from anxiety and excitement, I feel the same way about him still.

C: During the time Katy and I met, I was collecting eviction notices by the month and had deemed myself utterly unfit to date for a multitude of reasons. For supplemental income, I hosted karaoke on Friday nights at a bar, which had become my second home over the preceding few years. This was my spot, my tree house of sorts, where, perched quietly behind a computer monitor, I clicked the buttons necessary for drunk folks to shine for three minutes at time - gaggles of giggling birthday girls, lonely, crooning cowboys, soulful, middle-age divorcees, and so on. Anyway, as per routine, I was perched behind the monitor one Friday night, aloof as ever, clicking the necessary buttons when, to my sweet surprise, a girl with big, dark eyes and bigger, darker hair blew in with a crew of riff raffs. "What is she doing in my tree house with those three stripes shaved in the side of her head," I wondered and kept wondering. I needed to know...her...her story, but the appropriate opportunity didn't immediately present itself (not even when I declined her request to dance - I was too sweaty, or just not ready, to be honest). Now, it's never been my practice to approach attractive strangers, especially a wild looking girl surrounded by a group of wild looking friends, but curiosity and the thought that she might vanish as easily as she appeared left me little choice, so I said, "Hello, my name is Cody." While I can't say it was "love" at first sight, or that I even believe in such a thing, I have to say that a deep intrigue promptly set in. She stole my attention and hasn't give it back yet.

2.  Katy, you are an artist and many readers may have seen your studio day documentation so they are aware of your love of creating large scale underwear.  What else do you make?

K: My first love is printmaking and I really have been enjoying making reduction screen prints for a while now. I also enjoy relief and plain ole drawing too.

3.  Cody tell me about your band. What kind of music do you perform? What instruments do you play?

C: This is probably the place where Katy's and my aesthetics intersect the most - an appreciation for honky tonk culture. The first song I remember hearing on the radio is Dwight Yoakam's "Honky Tonk Man," which I heard in my grandpa's pickup while riding on his lap, pretending to drive down the dirt roads to his house, if that tells you how young I was. So, Porch Mice is like the grandson of honky tonk men, I guess. I'm a huge fan of Hank, Lefty, Buck, and Ernest Tubb, and those grandfathers of country music, so I'm trying to keep it minimal - simple and direct like them.  It's honky tonk boy, who was raised in town because the farm got sold. I play guitar and do the hollering.

4. Do you guys notice any changes in your work since you started dating?  Do you both feel like you have been introduced to new artistic mediums?

K: I knew I met my match when we both explained how we had given up on keeping up with recent trends in music and started listening to 90's country. Cody reminded me a lot of music and themes that have become relevant to my work. During graduate school I took Cody to see my studio and thought it was going to impress him to some extent. (I had just finished a bouquet of 57 real hot dogs dipped in polyurethane)  He walked around looking at all my finished pieces and accoutrements  and said "your work is gross". I was delighted, I love asking him for critiques and suggestions. He has also been incredibly supportive and encouraging of me taking time to make prints and to stay connected to our printmaking community. I am always inspired by Cody's work ethic and drive, even though our mediums differ he sets the bar at dedication.

C: I knew nothing about printmaking before Katy, so I have definitely learned more about the technical aspects of her medium, but what interests me most is her creative process and diligence, watching her ideas from conception to final product. She works hard and strikes a beautiful balance of taking her work seriously without being pretentious about it, which isn't always the case with artists. It's very attractive to me that she is creative and disciplined, but also self-aware. Art making, by nature, is a self-involved act, so for us to be able to allow one another the space and time needed to explore individual pursuits is as important as sharing those processes and products. From the beginning, we understood how important our work is to who we are, as well as the requisites that go along with it, so it's just something we unconsciously built room for in the relationship: "You work. I work. We work." Also, Katy comes from a family and community of artists and musicians, so this stuff is normal to her and them. So, although we are all very supportive and encouraging, none of what we do is weird or exceptional to each other, which is an attitude and dynamic I enjoy immensely. It's just what we do; it's how things are. As for changes in my work, I'm inclined to say that it has improved and can be attributed it to the stability she has brought to my life. It's much easier to concentrate on music when I'm not worried by the concerns she helps soothe.

5.  What does the future hold for you two? Okay, that is a loaded question... lets narrow it down artistically... any plans for collaboration?

K: This summer we came up with an idea to cover all the old classic country duets and dress in dated Porter Wagner/ Loretta Lynn style garb. Listed out all the songs that would be in the set list and even toyed around with the idea of making these into video pieces. Then we both remembered how tone deaf I am. It's the thought that counts right?!

C: I have a collection of poems that I've wanted to assemble in some sort of book for a while now. I'm not sure to what end, but I am trying to sucker Katy into helping me put it together. Maybe I can sweet talk her. 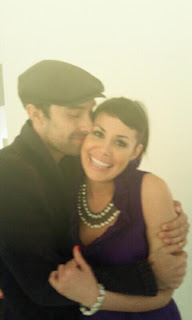 Aaaauugh! They are the dreeeeaaaammiest!  You can find Katy's art work here and listen to Cody's band Porch Mice here.  Thanks to both of you for sharing your story!

If you are part of a pretty dreamy artsy duo and you would like to share your own story get in touch!  See more couples from the past here.
Posted by A Beautiful Party at Wednesday, August 28, 2013

So lovely! y'all sound smart