Since I last spoke to you about growing crystals, or rather my unsuccessful attempt at growing crystals, many of you have been so great at sharing recipes found online. I have found some recipes I'm sure will work but some of the ingredients seem rather dubious and I'm afraid will put me on some sort of watch list. Meanwhile I'm just some dopey girl who wants to make beautiful little worlds in jars. It is totally elementary school science class at my apartment at all times.
I tried a recipe with Alum that I was sure would work and when it didn't I realized I bought the wrong kind of Alum. I need one that contains potassium. Any suggestions on where to find this besides the internet?
I did make this little thing and I'm not quite sure what to do with it. I have some quartz points that I did not grow on my own but I stuck in salt and then poured wax and glitter over it. I think this is beautiful but also think it was a chance creation that could probably never be repeated again. So I have this tiny object that sort of looks like the crystal castle I've been dreaming of. 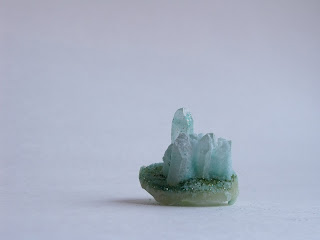 I also poured wax in a jar and stuck these points in it. I don't like it as much. It just looks like wax with crystals stuck in it. 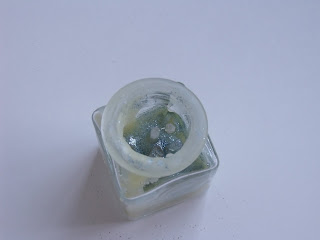 While I was photographing my crystals I got distracted by this little section of my studio. It may just be my favorite collection of things. I know I've shown it here before but I can't quit going back to it. 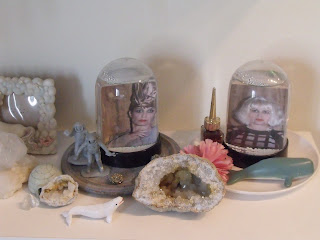 Any crystal-growing scientists out there? I want to grow something before I get over this idea entirely.
Happy Monday!
Posted by A Beautiful Party at Monday, March 12, 2012

no expert here, but I hope you keep trying, really love the idea of it!

no expert here, but I hope you keep trying, really love the idea of it!